WD-40 should not be used to lubricate a dryer. No lubricants should be used without express permission from the manufacturer. WD-40 is a flammable liquid that burns at temperatures reached in dryers. It also traps lint, which is also flammable. Lint build-up causes overheating, increasing the fire risk.

Contents show table of contents
Do Not Use WD-40 to Lubricate Dryers
WD-40 Is a Fire Risk in Dryers
The Manufacturer Cautions Against It
Lubricating Dryers Creates Lint Traps
What You Can Do if Your Dryer Squeaks
Sources
Was this helpful?

Do Not Use WD-40 to Lubricate Dryers

In most cases, lubricating the squeaking parts of a machine is the right thing to do, and WD-40 is a water-displacing solution that can be used in a plethora of ways. It can be a rust preventer, solvent, penetrant, and lubricant. 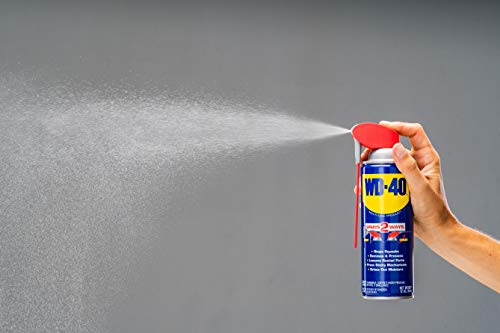 Despite this, it is ill-advised to use WD-40 for a dryer. But why?

Well, there are two main reasons:

WD-40 Is a Fire Risk in Dryers

True, the machine won’t be squeaking, but that’s hardly going to matter while you are beating out the flames.

There are other factors that contribute to the fire risk, but I will discuss them in a moment as they are related to the production of lint by the dryer. First, I want to mention what the manufacturers of WD-40 say about its use in dryers.

The Manufacturer Cautions Against It

The manufacturers of WD-40 themselves do not list using WD-40 as a possible lubricant for dryers. On their website, the only possible use of WD-40 they list related to dryers is that WD-40 can be used to remove crayons from dryers.

However, they explicitly state that you must unplug your dryer first before using any WD-40 to clean it.

This warning to unplug your dryer first before using WD-40 on or near your dryer indicates that using WD-40 for serious dryer-related issues is a bad idea.

Dryers produce lint. Most of it is collected in the lint trap. Some of it is exhausted out with the moist air (if your dryer is the ventilated type). But some lint will always end up in other parts of the machine. Lint on the dryer’s drum rollers may even be the source of the squeaking.

WD-40 leaves a residue behind on surfaces it is used on. This means that it will attract dirt and lint to whichever part it is used on, like with any other lubricant used in a dryer. As you can imagine, this will make the problem so much worse instead of better.

Now, you have probably already heard about the dangers of lint and heat. This is because it is extremely flammable. Both lint and heat are normal factors involved in running a dryer, and the manufacturers will have taken steps to minimize the risk thereof.

However, when you add a flammable, lint-attracting liquid into the mix, you are just asking for trouble. And that’s not even the end of it!

Enough lint on a dryer part can cause that part to slowly wear down over time, to the point where it will not run anymore. Before that happens, you will be dealing with a straining motor that is attempting to work against this build-up and the resultant resistance or friction.

When motors are forced to strain and work harder than they were designed to, they overheat. This alone would be a fire risk, but, of course, in a dryer, we add the functional heat and the flammable lint. Once again, using WD-40 as a lubricant could literally be adding fuel to the fire.

Luckily, simply cleaning out your dryer’s lint trap and any other parts that may have lint on them can severely decrease the chances of your dryer catching on fire. Keep all this in mind, and stay away from lubricants like WD-40, and you can easily avoid possible future dryer fires.

What You Can Do if Your Dryer Squeaks

You should empty the lint trap after ever one or two loads as a standard practice to try and minimize lint build-up in the other parts of the machine. But, when your machine is already squeaking, you need to get a little more invasive.

First, check if there are any loose objects inside the dryer—this can be a common cause of the squeaking noise.

If this isn’t the solution, it’s time to open up your dryer. Check your dryer’s manual to locate various parts of your dryer and familiarize yourself with how your dryer works before you start taking it apart.

Once you have exposed the inner workings of your dryer (very carefully and safely), you can use a vacuum cleaner to suck up accumulated dust and lint.

With the dryer open, I recommend that you check the dryer belt. If it looks worn or has some cracks in it, then you might as well replace it while the drum is exposed. Sometimes squeaking can actually be caused by a problematic dryer belt.

If the squeaking continues after you clean your dryer, don’t hesitate to call the manufacturer of the dryer or a professional.

But, if one of them suggests using WD-40 to help fix your dryer’s squeaking, at least you will have enough knowledge at this point to kindly point them in the direction of the door, away from your dryer, and ask someone else.