Your bathroom fan may run non-stop because it is designed to do exactly that. It is likely a dual-speed continuously operating exhaust fan that forms part of your house’s mechanical ventilation system. It runs continuously to provide a continuous stream of fresh air.

Does your house seem to have a mind of its own? Fans running, and mysterious buttons and switches around that seem unfamiliar? Modern homes and even recently retrofitted homes contain a wide range of new technology that takes some getting used to.

They have their benefits — cleaner air and lower electricity bills, especially – but they take some getting used to. When we moved to a rental house while our house was being built I was so annoyed by the noise coming from the bathroom. I decided to figure out why the bathroom fan keeps running.

If you’ve recently moved into or purchased a home with a fan that surprises you by running non-stop —or if you’re concerned about systems for maintaining air quality in your home — here is everything you need to know.

The bathroom fan could also be running all the time because the humidity sensor is defective, or not adjusted properly. More on this later.

Modern home building and renovations have prioritized energy efficiency. One of the best ways to make a home more energy efficient is to tighten up the home in order to prevent air leaks. This makes it much easier to maintain the temperature in the home — heating, and cooling is a significant chunk of home energy bills.

One downside to a sealed up home can be air quality. A drafty home may not be very energy efficient, but there’s usually plenty of fresh air (for better or for worse). Designers and builders of modern and tight homes use different techniques, including mechanical ventilation, to deal with air quality.

Mechanical ventilation circulates fresh at a controlled rate air using ducts and fans instead of letting air flow haphazardly through the walls, windows, and roof.

One element of a mechanical ventilation system can be a continuous operation exhaust fan. That may be what you have in your bathroom. It’s designed to run continuously to allow the house to exhaust stale air that accumulates inside (since it can’t leak out because your house is so well sealed).

Continuous operation exhaust fans could be used to ventilate any room in the house that is being painted.

There are three common locations for a continuous operation exhaust fan.

If your bathroom fan is always running, it’s probably a continuous operation exhaust fan that is part of your house’s mechanical ventilation system in the form of a dual speed exhaust fan.

Why does a continuously operating exhaust fan have two speeds? The first — lower — speed is the unit’s constant and standby speed when it is working as part of the whole house’s mechanical ventilation system. In a perfect world, the unit is so well designed that the sound is barely noticeable at the low speed. In fact, if you can suddenly hear it at its low speed when you couldn’t before, it may need to be serviced or cleaned.

What about the second speed?

The second speed in a dual-speed bathroom fan is for when the bathroom is actually in use, i.e. you’ve turned it on to vent the bathroom during or after a shower.

When you want to use the fan at its higher speed to vent the bathroom, it’s turned on and off from a switch that is usually located next to the bathroom light switch.

Keep in mind though, that it’s the higher speed that is turned off and on by that switch. When you turn “off” a dual speed exhaust fan that is part of the house’s mechanical ventilation system from a bathroom switch, you’ll slow down the fan… but it will still run slowly and quietly doing its job to keep the air in your home fresh.

Continuous operation exhaust fans that are part of a kitchen range hood and in a central area of open-plan home work in exactly the same way.

How do I turn it off completely?

American Society of Heating, Refrigerating and Air-Conditioning Engineers ventilation requirements mandate that an exhaust fan run continuously in order to meet ventilation requirements. But HVAC contractors and electricians are also required to install an override control — a master on/off switch — in the home where it can be easily accessed by the homeowner.

HVAC installers and electricians have three options for installing that override:

Mechanical ventilation systems should, if you’re purchasing a home, be part of a home inspection. You should also ensure you get copies of all manuals and guides to the operation of the system from your builder or realtor. If you’re designing a home, ask your contractor about how to meet ENERGY STAR requirements, and the advantages and disadvantages of certification.

What does it cost me to keep that fan running?

The fan is running off electricity, so it’s not free. There is a cost, for sure. But you also need to keep in mind the value of fresh and clean air in the home; that’s what the system that includes that continuously running fan is designed to ensure.

Assuming your builder or contractor used an ENERGY STAR certified exhaust fan — and depending on electricity rates in your area — Bathroom fan is probably costing you less than $2 per month. I consider that a pretty cheap price to pay for clean air.

There are plenty of fans and appliances you wouldn’t want to run non-stop, that’s for sure. A properly certified, installed, and maintained continuous exhaust fan is designed to run non-stop. It has been tested for this very application and can be used safely and reliably.

The American Society of Heating, Refrigerating and Air-Conditioning Engineers has established standards for designing ventilation systems to ensure acceptable indoor air quality. Those standards include things like the amount of sound that a continuous use exhaust fan can emit to satisfy the requirements for an ENERGY STAR Certified home. Regulations established by the United States Department of Energy stipulate the requirements for installing and controlling these devices in American homes – whether new construction or retrofits.

Bathroom Fan With Humidity Sensor Running All The Time

This is actually quite a common problem with the cheaper models. They use low-quality moisture sensors that die in a moist environment after a couple of years.

I actually went through two cheap fans before I bought a quality fan to replace the junk. They both lasted just shy of 2 years. 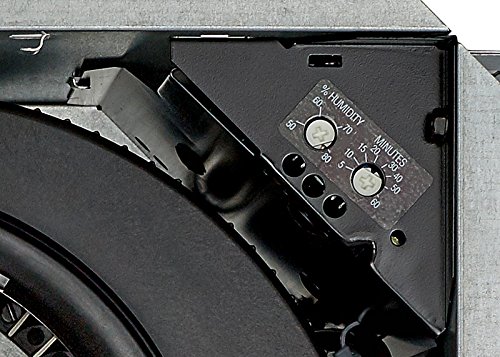 The humidity sensor will send a false reading to the fan controller and that is why the fan is constantly running.

This can be quite annoying, especially if the fan is loud.

I thought about replacing the sensor, but after opening up the fan I decided that the entire unit is of such low quality that I would rather buy a new one, so I recommend you to do the same.

Broan-Nutone is famous for its reliable bathroom fans, I recommend getting something from their product range. Especially something with the new Sensaire technology. 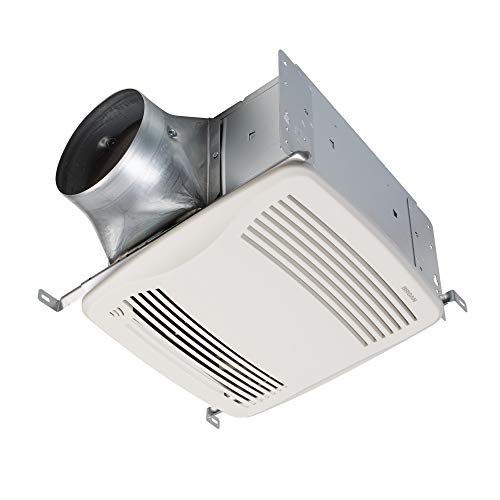 How to Turn Off Automatic Bathroom Fan?

While you wait for the new bathroom fan it would be nice to turn the old one off to get some peace of mind. 🙂 Luckily it’s not that hard.

Turn off the breakers one by one until the fan stops. That’s right, its that easy.

Should Bathroom Fan Be on All the Time

Unless a bathroom fan is part of a whole-house ventilation system it should not be running all the time. There is probably something wrong with the humidity sensor or timer switch that is causing the fan to keep running.

While most modern bathroom fans are rated for continuous operation and won’t pose a fire risk, their lifespan will be much shorter when they are running unnecessarily. Also, excessive ventilation will raise your energy bill.

An easy way to find out if you have a regular fan is to remove the fan cover. If the fan motor is behind the cover, then it is a regular bathroom fan. This means it should not be running all the time.

Related article: Reasons Why a New Bath Fan Is Not Working (List With Solutions)

link to 6 Reasons Why Double/Triple Pane Windows Are Cold

Windows being cold to the touch in the winter is not an odd occurrence, but it is possible that an underlying issue is causing this and also causing your energy bills to rise. Whether the problem is...