Summer is on the way, and a ceiling fan is a great way to keep the air in a room circulating on those steamy hot days. Maybe you’ve wondered if your existing fan is still spinning as fast as it’s supposed to; we’ll show you how to find your answer.

We have the calculations to help you choose the right fan for your room and, as a bonus, a quick way to measure your ceiling fan speed quickly and accurately.

The average speed for a ceiling fan is 300-350 RPM, or 43-50 MPH, or 69-80 kmh. This can also be measured as mph or km/h, but the most common measure of fan speed is rpm. Fan speed is affected by the length of the blades, design, and size. Ceiling fans come in various sizes to suit different-sized rooms.

A Ceiling fan’s blade speed is measured in rotations per minute, abbreviated as rpm, RPM, rev/min, or r/min.

RPM is an international unit of frequency used to indicate the number of revolutions at which something rotates around a fixed axis in a minute.

The international unit is used preferentially because it helps not to have to translate the speed of the fan into metric and imperial units depending on what country the fan is being shipped to. It also makes different models easily comparable.

Still, some people prefer imperial or metric measurement scales. The below calculations will allow easy conversions from RPM:

Fan motors are made in many different shapes and sizes and are either AC or DC powered. DC fan motors are up to 300 percent more efficient than AC motors of the same size.

The fan blades themselves impact the actual speed achieved by a motor of a certain size. They also impact the speed required for efficiency.

Ceiling blade size, shape, pitch, and number all influence ceiling fan speed and efficiency. This is because the blades create resistance.

Resistance is what forces air to flow, but the resistance also means that a motor of a certain capacity will be unable to reach the speeds it is capable of achieving without resistance.

We will look at each factor in isolation and assume a constant fan motor capacity in our observations. However, in reality, the interactions between all of these factors are complex and there is a “window” for which each relationship is true.

Yes, when you have more blades, you increase the surface area of the fan, thus increasing its resistance. However, if one fan has 3 paddle-shaped blades and you compare its resistance to a fan with 5 long and narrow blades, you might find that the 3-bladed fan produces more resistance.

Additionally, because the long, narrow blades are less effective at scooping and moving air, this fan may be less efficient, even though it has more blades.

Another example is that large-bladed fans tend to rotate at fewer revolutions per minute than smaller fans but retain their effectiveness at achieving good airflow due to the longer blades having increased blade tip speed.

What Is the Average Ceiling Fan Speed?

The speed at which ceiling fans spin is primarily determined by the manufacturer’s design. To maximize the fan versatility, most are fitted with a motor that has adjustable speed settings so that the airflow created is adaptable to the user’s preference.

RPMs for smaller fans may be higher because they typically have to rotate faster to achieve a certain efficiency of airflow. Larger fans will have smaller average RPMs because the longer the blades, the more efficient they are with fewer rotations.

Each manufacturer determines the actual speed for the fan design, so check the RPM rating when buying.

UL standards regarding maximum fan speeds are pretty specific. UL 507 states that the maximum allowed speed of the fan blade tip is:

You shouldn’t have t worry about this, though. The fan would not be saleable if it contravened this standard.

Fan speeds are limited for safety reasons due to the blades being exposed. Accidental contact with a spinning blade can cause serious injury, so caution is advised.

When choosing a fan, keep in mind that faster is not always better. The design of the fan and the size also significantly affect its performance.

Also, the amount of noise is something to consider. The higher the number of blades a ceiling fan has, the more noise it’ll generate, and increasing the speed will further increase the noise produced.

Measuring the Speed of a Ceiling Fan

Measuring your ceiling fan’s speed can be easily done with an electronic, non-contact, handheld tachometer. The tachometer is a universal rotational measuring tool used to determine the rotations per minute for several items such as lathes, electric motors, fans, and more.

The Neiko 20713A (amazon link) digital tachometer available online is perfect for the job. Here’s how to measure your ceiling fan speed in a few easy steps. 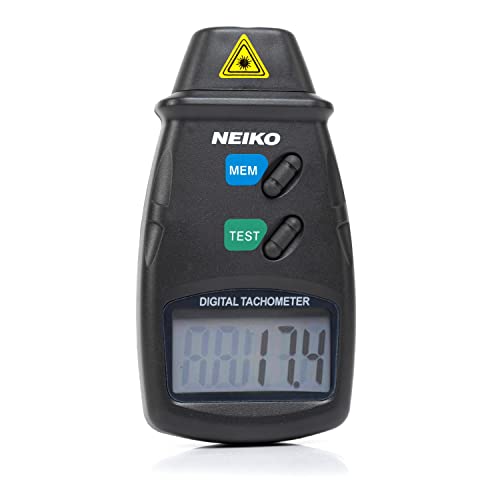