Bathroom fans do the important job of regulating moisture levels and eliminating odors in your bathroom. Despite all the positive attributes they provide, it’s important to know the dangers a bathroom fan can pose to your residence as well. They are, after all, electrical devices used in notoriously wet rooms!

However, knowing what is possible is different to understanding what is probable. Yes, a risk exists, but how high is the risk? There are also common causes, warning signs, and prevention methods, and knowing these can go a long way to making sure that your home does not end up as a statistic.

Bathroom fans can be a fire hazard. Common causes include dust and lint buildup, faulty wiring, and leaving the fan on for extended periods of time. Proper usage and upkeep can prevent fires from starting in the bathroom fan.

Contents show table of contents
Fire Risk Exists With All Electrical Appliances
How Common Is It for Bathroom Fans to Cause Fires?
Main Causes of Bathroom Fan Fires
Dust and Lint Buildup
Leaving Fan on for Extended Periods of Time
Faulty Wiring
Identifying Signs of Potential Issues
Safety Measures to Prevent Bathroom Fan Fires
Sources
Was this helpful?

Any appliance that requires electricity to function may cause a fire. Outdated appliances, improper wiring jobs, and overloaded circuits are some common causes of electrical appliance fires.

Especially when in contact with moisture (such as in a humid bathroom), the chances of fire increase. If wiring gets wet, it may not properly insulate the electrical system and can lead to overheating.

It can also conduct the electric current much more easily, which creates a shock risk.

While bathroom fans are equipped with safety measures so that they properly function in the bathroom environment, bathroom fans are still electrical appliances exposed to high levels of moisture. Special precautions must be taken to ensure the safety of inhabitants.

How Common Is It for Bathroom Fans to Cause Fires?

In the previous section, we covered what was possible. Here we are going to look into the probability.

In 2017, the US Consumer Product Safety Commission (CSPC) published an assessment of incidents involving fires caused by exhaust fans.

The CSPC studied 423 incidents that occurred over the course of 20 years. They report:

The CPSC notes that their study focuses on a sample of incidents representative of all exhaust fan incidents. It does not claim to include all incidents that occurred in the US during this time period.

For example, one county in Illinois responded to three exhaust fan fires in 2014 alone.

Few of these incidents proved to be fatal, but they are still costly to residents. The fire department of Westerville, OH, responded to 10 bathroom fan fires over the course of 2008-2015, six of which accounted for over $30,000 in damages each.

Dusty particles from your towels, toilet paper, bath mats, and countertops can quickly accumulate in a small space such as a bathroom.

Moist air catches the dust particles. When the air is expelled through the exhaust fan, the particles remain behind and stick to the fan’s cover, blades, and motor.

If allowed to accumulate for a prolonged period of time, excess dirt and lint will not allow the fan to properly expel heat.

So, a clogged fan is far more likely to overheat and cause a fire than one that is periodically cleaned. You can also try to minimize the amount of dust and lint gathering in your bathroom.

Leaving Fan on for Extended Periods of Time

The bearings in a motor naturally deteriorate over time, but keeping the bathroom fan on all the time will significantly speed up the wear-down time of your motor.

In addition, if the motor stops rotating, the electricity supplied to the fan can build up. The electricity surge may not be enough to flip the circuit breaker, but it can overheat the fan and cause a fire.

Many newer bathroom fan models come equipped with a thermal overload switch. These switches automatically shut off the fan if it begins to overheat. However, fans produced before 1990 most likely don’t have this feature.

Thermal overload switches can also fail on occasion, so do not only rely on them to regulate the temperature of your bathroom fan.

As with any electrical appliance, proper wiring is necessary in order to limit fire hazards with your bathroom fan.

Old wiring may not be able to handle great demands of electricity or may no longer be up to code. It is also more likely to have damages such as fraying and worn-out wires.

Short-circuiting and excess heat within the electrical system for your bathroom fan can cause sparks that are easily ignited by lint in the vent.

It is recommended that homes built more than 10 years ago have their electrical system inspected to avoid fire hazards.

Fans can also come with faulty wiring or the wiring in your house can be damaged in some way, so it’s not only a risk in older homes.

There are some warning signs to look out for to make sure your bathroom fan does not become a fire hazard.

Below, I’ve listed some common signs that your fan needs attention:

Bathroom fan fires are preventable with proper usage and upkeep.

Follow these safety measures to ensure your bathroom fans won’t become a fire hazard in your home.

Clean your exhaust fan at least once a year in order to prevent a dangerous buildup of lint and dust.

Depending on how often the bathroom is used, once a year may not be enough to keep up, so keep an eye out for it. Another good tip is to mark a date in your calendars to routinely clean the fan once or twice a year.

American Family Insurance even recommends that you wash the vent and clean out the connecting ductwork to remove lint that has gotten through the fan.

Do not leave fans continuously running. It is recommended to only run your fan for about 20-60 minutes in order to properly remove moisture from the air without overworking your fan. 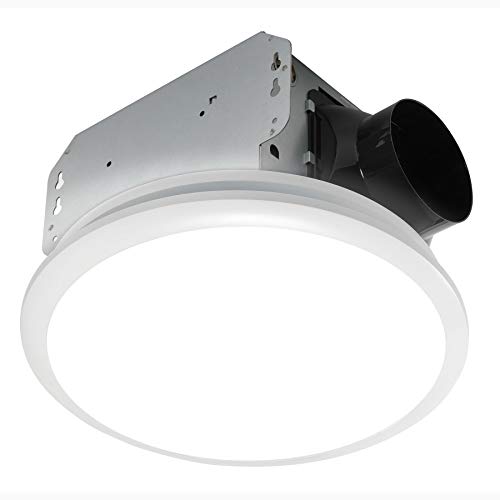 Use LED lights instead of incandescent bulbs in your fan (if you have a model with a light). Along the same lines of updating your bathroom fan model, swap out your old lightbulb for an LED one. They use less energy and do not get hot when in use.

LED lights reduce the amount of electricity that is needed, so the circuit will have to supply less to the bathroom fan and is less likely to overheat.