From style to size to power, it seems that there are endless options when it comes to choosing a ceiling fan. Now, if you’re looking for a powerful and effective ceiling fan, it probably makes sense to think that bigger is better when it comes to the fan’s blades.

While this is technically true, it’s not a solid “rule” that bigger fans are always better at moving air than fans with smaller blades. That’s because there are many factors at play here, and, in fact, a larger blade can be a detriment in some cases.

Bigger fan blades will move more air, but only if the other ceiling fan variables are adjusted to match the larger blade size. The motor must be stronger, and the design must ensure the best balance between drag and airflow production.

Contents show table of contents
Bigger Fan Blades Move More Air
Confounding Variables
Motor Size
Pitch of the Blade
Material That the Blade Is Made From
The Shape of the Blade
Blades Can Be Too Big
Is There a Best Size for Ceiling Fan Blades?
Best Size Fan for a Room/Space
Sources
Was this helpful?

The question of whether or not one fan will move more air than another based on a single factor (like blade size!) is not actually as simple as it seems.

Technically, if you remove all confounding variables, a fan with bigger blades will move more air than a fan with smaller blades because the larger blades cover a greater surface area and will, therefore, scoop and push more air per rotation.

However, as soon as you add in even one confounding variable, the theory has to change from “definitely” statements to “in certain cases” or “up to point” statements. And there are more than one of these variables when it comes to ceiling fans.

The bigger the blade, the heavier it is. Additionally, it means that there is more surface area to create friction and resistance to the rotational movement.

Essentially, the bigger a blade is, the stronger the motor needs to be in order to actually move air effectively. A motor will have an easier time moving fan blades with a 42″ span than blades that have a 52″ span (assuming the other features of the fan blades are otherwise identical).

You see, then, how the answer to this question is not so simple! A fan with larger blades only has the capacity to move more air, but it is likely other factors must also be changed in order for it to do so effectively. Let’s explore more of those factors.

Pitch of the Blade

If a blade is angled, or “pitched” to be perfectly horizontal, then it won’t actually move much of anything at all. The blades will simply slice through the air, much like the wings of an airplane, but they won’t push air in any particular direction.

Similarly, if you pitch the blades to be directly vertical, then they would simply spin air in circles around the fan rather than push the air up or down.

This would render a fan useless for its intended purposes. Additionally, this creates more drag, or resistance, since the biggest amount of surface area possible will be creating friction as it moves against the air.

Long story short, pitch can affect the efficiency of a fan when it comes to not only the speed of its rotation, but also the direction it moves air and how much air it moves at one time.

The angle of the fan blades must be carefully considered and tested in order to determine what angle will allow the chosen blades to be most effective. However, it’s commonly considered that the best pitch is 10-15 degrees.

Material That the Blade Is Made From

Material also affects the efficiency of a fan, although it’s a bit less technical than other things like blade pitch.

The general idea is that you want a long, moderately narrow, lightweight, and solid fan blade—but many materials are capable of meeting these criteria. Moderately narrow and light materials are ideal for aerodynamics, and for allowing the motor to run more efficiently. 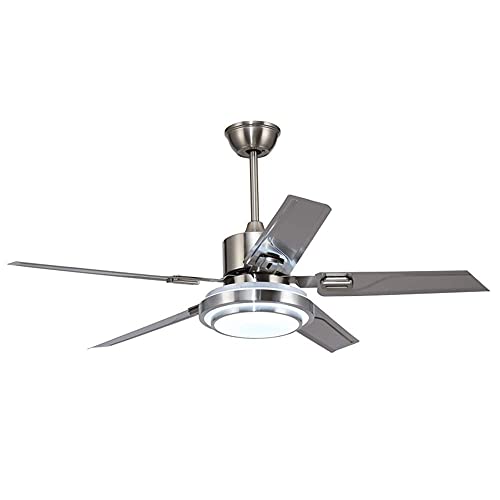 Different types of wood, fiberboard, metal, and plastic are all viable options, and all have different densities, making them heavier or lighter than each other.

Each is also more or less flexible and durable than the others. Each type of material can also only be thinned down to a certain point before becoming too flimsy for use at high-speed rotation.

Additionally, the material needs to be durable enough not to bend under its own weight—you want the blades to stick out at the angle they are set at without dipping down further from the fan’s center. This can not only mess with the fan’s aerodynamics, but can be a safety hazard.

The Shape of the Blade

The design, or shape of the blade is yet another factor that can affect how much air a fan can move.

The answer as to what shape is best is, as you have likely caught on by now, not a simple thing.

Fan blades can also be curved, like those found on retractable ceiling fans. Curved blades are slightly more efficient than straight fan blades and they are quieter as well.

Blades Can Be Too Big

Imagine that, for every fan, there is a range of blade sizes that will function well with its power, construction, and all other confounding variables.

Within this range of potential fan sizes, you generally want to go as large as possible with fan blades without them being so big and heavy that they overpower the motor and actually begin to reduce airflow.

That’s because when you are running any device with a motor, being able to keep it running at low speeds will help to increase it’s lifespan and maintain its efficiency for longer.

By using the biggest compatible fan blades possible, you don’t have to compromise the motor or the airflow, since bigger blades move more air at once than smaller blades can at the same speed.

Is There a Best Size for Ceiling Fan Blades?

To sum everything up, it’s not really possible to say what the best size for ceiling fan blades is as a whole.

The best size for a fan’s blades depends entirely on the other components of each individual fan model, and is subject to changing completely from one model to the next.

The best thing to do is to simply trust that a fan’s manufacturer has already done the research and used the best size blade for their fans. After all, they can’t grow or stay in business if they aren’t putting out quality products!

What you can do, however, is research what size fan is best for the room you’re looking to install a fan in.

Best Size Fan for a Room/Space

Two, you want to get a fan that’s big enough to actually move air around the whole room. As a good rule of thumb:

For larger rooms, you may want to consider installing multiple ceiling fans. If you want to install a fan in a very small space and cannot find one that meets clearance guidelines, you may also consider purchasing a retractable ceiling fan.