A ceiling fan can be a source of relief from the weather in both winter and summer months. However, it becomes a nuisance when it doesn’t turn off on demand, especially when you no longer have a need for it.

Although it’s quite unusual for a ceiling fan not to turn off, there are a couple of reasons this can happen. I’ve put together the most common causes of this problem and the ways you can tackle them.

Contents show table of contents
Different Ways to Turn off a Ceiling Fan
Reasons a Ceiling Fan Is Not Turning Off
What to Try if You Have a Remote?
1. Replace the Remote’s Batteries
2. Reset the Remote
3. Get a New Remote
4. Replace the Fan’s Receiver
Other Things to Try
1. Inspect and Test the Pull Chain
2. Make Sure the Wall Switch Works
3. Check the Wiring
4. Examine the Fan’s Components
When to Replace the Fan?
Sources
Was this helpful?

Different Ways to Turn off a Ceiling Fan

Every ceiling fan comes with at least one of these or a combination of these control options. Over time, they can wear out, so before concluding that the fault is from your fan, confirm that the issue isn’t from its control.

It’s pretty easy to diagnose a faulty controller if you have multiple control options. You simply have to use an alternative control to operate the fan and see if you get the same result.

You could also try using your smart control to switch off the fan if you have one set up.

If you are considering just leaving your fan running for a few days because it’s not hurting you and you don’t have time to fix it, then check out my article on the safety considerations of doing this.

Reasons a Ceiling Fan Is Not Turning Off

There are different reasons your ceiling fan would not turn off. It could be because of something as simple as a dead remote battery, or it could be caused by something more serious like a faulty fan.

While diagnosing the problem, it’s best to start with fan components that do not require so much effort. For example, if you use a remote, you could begin by changing its battery. If the easy fixes do not work, then you can proceed to more demanding procedures.

Other than an inoperative control, the issue can be caused by a faulty wiring connection or damaged internal components.

In some cases, it is safer to flip the breaker switch to shut the fan off and wait for an electrician. However, there are also some issues that are pretty easy to fix with a little guidance.

What to Try if You Have a Remote?

Remote batteries typically last between 3-6 months. So, if you’ve been using your remote for a while and it stops working, there is a high possibility that the batteries are dead.

Most remotes feature an indicator light that comes up whenever you press the remote. If the indicator doesn’t come on when you try to switch off the fan, it’s a sign that the remote is either damaged or the batteries need to be replaced.

It’s also possible that the batteries aren’t dead but have gotten weak. If this is the case, you might have to move closer to the fan (where the receiver is located) before it can respond to the remote.

For the battery replacement to work, ensure that they are properly installed.

If you’re trying to switch off the fan with a remote and it isn’t responding, it’s possible that the remote and receiver are on different frequencies.

Ceiling fan remotes and receivers have a DIP switch that is used to set the frequency of the fan.

Here’s how to reset a remote:

If you’ve gone through the previous steps and are still unable to switch off the fan, you might have a faulty remote.

The indicator light in a faulty remote isn’t going to come on when you press the buttons. So, if you’ve replaced the batteries and the lights still don’t come on, your remote is probably damaged.

If you have a universal ceiling fan remote (amazon link) or you own another remote that’s compatible with the fan, you can test to see if the problem is from the remote or from the fan. 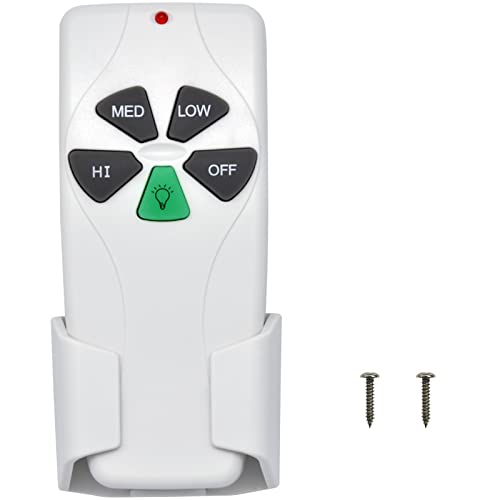 You can either purchase a remote that matches the brand of your fan or you can get a universal remote. Brand-specific remotes have more features and cost more than universal remotes.

A ceiling fan’s receiver is usually set at a frequency that matches that of the remote so that whenever you press a button on the remote, the receiver would send a signal to the fan.

If the indicator light on your remote is showing, it could be that the receiver isn’t getting the signal from the remote.

The problem could also be that the receiver can no longer read signals that are sent from a distance. Move closer to the fan and press the off button on the remote. If that doesn’t work, switch off the fan at the circuit breaker, remove the fan’s canopy, and check that the receiver is properly wired to the fan.

If the wiring is intact, then you might be dealing with a faulty receiver.

While purchasing a replacement, ensure that it is compatible with your remote. You can either purchase a brand-specific receiver or a universal receiver (amazon link).

If you are unable to get a matching receiver or if your remote is wearing out, you can purchase a remote and receiver kit (amazon link) for less than it would cost to buy individual units.

Other Things to Try

1. Inspect and Test the Pull Chain

If the problem isn’t from the remote, another likely suspect is the pull chain.

You should feel some resistance when you pull the chain. If you don’t, it might be a sign that the chain is stuck and you might have to purchase a replacement.

Broken pull chains are pretty easy to detect and depending on the nature of the damage, you might have to purchase a replacement pull chain switch or you could simply reattach the broken chain. 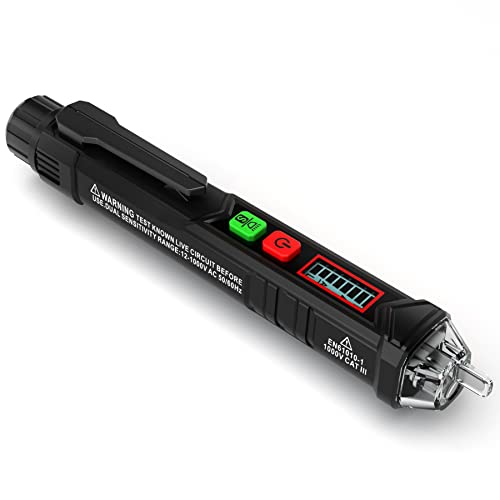 If you aren’t familiar with using a pull cord, you might find it difficult to turn off the fan since there isn’t a specific button for switching off the fan.

Most ceiling fans have four settings (off, high, medium, and low). Oftentimes, it takes about 30 seconds for the change to be noticed, so if you go ahead to pull the chain immediately, you would end up moving to the next control setting.

Rather than pulling the chain repeatedly, pull it and wait a little to see if the fan goes off.

2. Make Sure the Wall Switch Works

If your fan is still not turning off, it could be that the wall switch isn’t sending a signal to the fan.

The toggle lever or slide mechanism of the switch interacts with the fan and if it isn’t working properly, the switch would be unable to control the fan. So, if your toggle lever is loose, or worn out, you would have to replace the switch.

If the problem isn’t from the switch itself, it could be that it isn’t connected to an electric current.

To know if the switch has an electric current, remove the switch’s cover plate and test it with a voltmeter. You should also conduct a continuity test to ensure that the current flowing through the circuit is continuous.

Since the fan is working perfectly, you wouldn’t have to meddle with the wires that power the fan. Instead, you should look at the wires that are connected to the different controls.

First, you have to switch off the fan from the circuit breaker. Underneath the canopy, identify the control wires (usually red, blue, or stripped). Check that the wires are properly fitted and that current is flowing through them.

If you notice short wires, they would have to be replaced.

You should also confirm that all electrical wirings are properly connected.

The problem could be a faulty internal component. So, you’d have to inspect your fan for parts that might be damaged or out of place. You should also look out for signs that an electrical component has shorted out.

If you still have your fan’s manual, you can use the images as a reference while checking for faults in the fan.

You might have to disassemble parts of the fan and if you aren’t skilled in electrical repairs, you might be unable to spot the damaged component. So, it might be best to have a professional look at the fan.

Before you proceed with this step, you need to turn off the fan from the circuit breaker.

When to Replace the Fan?

The question of whether you should replace the fan or not would depend on factors like the cost of the fan, the nature of the damage, and the cost of repairing the fan, especially if you have to employ an electrician.

On average, electricians charge between $85 to $200 to repair a ceiling fan. So, if your fan is very old it might be better to get a new unit.

Sometimes, electricians might charge more than the cost of the fan, so that is something you should also put into consideration.

If your fan is constantly breaking down and developing faults, it’s probably a sign that you need to replace the unit. You might also have to replace the fan if it makes buzzing noises or if there is something wrong with the motor.

If your problem is that you turn the fan off but it comes back on by itself, then check out my article on Non-Remote-Controlled Ceiling Fan Turns on and off by Itself.