Something about your fan has seemed off lately. Perhaps it does not work as well as it used to. Maybe it looks a bit stale. Maybe the blade color does not match the rest of the room anymore. Whatever the reason, you are likely looking to replace your fan.

However, upgrading your fan does not require replacing it entirely. It is possible to upgrade parts of your fan to improve its quality and appearance.

Ceiling fan blades can be upgraded in many fan models (not all). However, they have to be replaced with blades that fit into the fan brackets, and they must be the same weight and length as the previous blades. Changing weight and length puts strain on the fan and motor, which is damaging and dangerous.

Ceiling Fan Blades Can be Upgraded

Replacing a ceiling fan is not the most difficult job in the world, but it can seem a pity to replace the whole fan if everything is fine except the fan blades.

Happily, ceiling fan blades are one of those replaceable parts that can be swapped out without incurring the cost of buying a new fan and the difficulty of wiring it in.

Caution: Don’t Just Use Any Blades

While replacing the ceiling fan blades is actually a pretty simple task (I’ll tell you how to do it at the end of this article), finding the right blades can prove to be the stumbling block in your endeavor because there are no universal ceiling fan blades.

Blades fitted to a fan have certain requirements and properties that cannot be altered if the fan is to function properly. When equipped with the wrong blade, it could seriously damage the fan.

You have to make sure that your new blades not only fit into your fan, but also that they are compatible both in length and weight (bigger blades are not always better).

For the best performance, it is important that your new blades sit well in the brackets. When they are loose, the fan can become wobbly, which causes all sorts of issues from trapped wires to motor strain.

In addition, poorly-fitted blades can cause the fan to be very noisy as the loose parts hit against each other while the fan is moving.

There are a couple of things that can prevent proper blade-bracket attachment, including:

Why Increasing Blade Weight is Unwise

Increasing blade weight can create many problems for the fan. Fans are designed to hold a certain amount of weight, so when the blades weigh more than what the fan was designed to hold, the fan will struggle and become damaged.

For instance, the blades can pull against the brackets and fan housing, causing damage to the structure of the fan. These damages can be costly and sometimes mean replacing the entire fan, which is what you were trying to avoid in the first place.

In addition, with added weight, the blades might not be sitting properly and they can pull down irregularly, making the fan unbalanced. An unbalanced fan brings its own batch of problems; most notably, it causes wobbling, which strains the whole fan unit, including the motor.

Most importantly, when blade weight is increased, the fan’s motor must compensate for the increased weight. This means that the fan will likely slow down, becoming less efficient. The motor might even burn out entirely, making the fan useless and possibly even a fire hazard.

Increasing Blade Length Can Cause Problems/Dangers

Now, the additional weight could be counteracted by using a lighter material. Unfortunately, longer blades can still come with their own set of problems, even if they are not heavier, and some of these problems are potentially dangerous.

Longer blades require more motor power to be efficient. This means that a fan would not be able to move blades longer than it is equipped to handle as effectively as it moved the original blades. This could lead to the fan motor overheating, burning out, and possibly even starting a fire.

Some manufacturers match blade length to motor power and so increasing or decreasing blade length would impact the motor. On the other hand, it also means that you are more likely to find a good blade-motor match by simply choosing blades the same length as your original blades.

However, this system is complicated by the fact that other manufacturers have no set motor power to blade length connection.

This makes replacing the blades more complicated because you can’t just select ones of a similar size unless you know for sure the fan manufacturer operates that way.

The best advice I can give is to tell you to ask the fan manufacturer for advice. They’ll be able to tell you if you can replace your model of ceiling fan’s blades. In addition, they’d be able to direct you to the best fit options for your fan.

Where to Find New Blades

Fan blades are sold at most home retail and hardware stores, including Home Depot, Walmart, and Amazon. 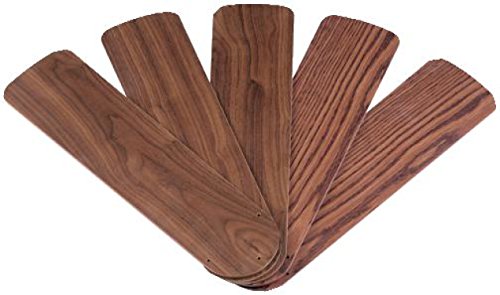 While there are universal or generic fan blade replacements out there, it is recommended to search for the blades of the same brand as the fan. These are most likely the best fit for your fan. In addition, it is important to keep your blades around the same length and weight to prevent damage.

You can also search through your fan manufacturer’s website to find a suitable fan blade without the hassle of searching a store.

As I mentioned at the start of this article, replacing ceiling fan blades is actually a quick and easy process. Here is a list of items that you will need:

It is optional but recommended to clean your fan before working on it to prevent dust and dirt from getting in your eyes as you work.

And you’re done! Now your fan should work as good as new!