Logically, we know that there are clearances for ceiling fans. Horror movies have certainly reminded us that it pays to keep a certain distance from fan blades (although the potential injuries are grossly exaggerated in such movies). It’s also obvious that the blades should not bump into anything. But clearances are actually a little more technical than that when it comes to achieving the best airflow.

The operation of a ceiling fan is highly dependent on its hanging space and height. Did you know you can even alter whether your fan is primed for heating or cooling based on these clearances? You can also handicap the efficiency of your fan if you aren’t aware of it.

Optimally, fan blades should be 8-10” from the ceiling, 8-9 ft from the floor, and 18” from walls. Clearance is crucial for safety and efficiency. A fan needs enough space to move air around the blades and needs to be close enough to access the upper and lower layers of air in a room.

Contents show table of contents
Why Do Clearances Matter?
Efficiency
Safety
Ceiling Fan Clearances
Floor Clearance
Wall Clearance
Ceiling Clearance
Is Ceiling or Floor Clearance More Important?
What to Do When the Fan Is Too Close to the Ceiling
Can You Shorten Ceiling Fan Blades?
Flush Mount vs Downrod
Sources
Was this helpful?

Why Do Clearances Matter?

How Do Fans Work

A fan uses tilted blades to create airflow and circulate air throughout a room, although, they are intended to move slow enough to minimize the disturbance of items in the room like paper and curtains.

Most ceiling fans come with a switch, so you can choose between summer and winter mode. You might think it is merely a gimmick to make it seem fancy, but there is actually a difference in how the fan works.

This difference is because the fan serves slightly different purposes; in summer it works to cool the occupants of a room (it works on the principle of wind chill so they can only cool you if you are in the room).

In winter it is trying to circulate warmer air to help heat the room. In the winter (warming) setting, the fan blades turn clockwise. This movement of the fan draws up the cooler air from the floor level, which moves the warmer air from around the ceilings and walls into the rest of the room.

It’s my opinion that winter mode is not that helpful unless there is an external heat source.

The efficiency of ceiling fans, i.e., how well they move air from around the ceiling and floor to achieve a cooling or heating effect, relies, in part, on clearances.

When it comes to the relationship between airflow efficiency and ceiling fan clearance, there is very little mystery. Quite simply, the closer the blades are to the ceiling, floor, or walls, the less air volume the fan has access to, and the more difficult it will be to move the air.

If you have a ceiling fan sitting right in the corner of a room, just able to turn, then the blades will be pulling air from the very limited space between its blades and the wall. Less air volume means less air movement.

Furthermore, there are more obstacles nearby that the moving air will collide with, losing energy or being redirected in a random direction. Airflow efficiency relies on uniformity of direction.

The same principles apply the closer you get to the ceiling and the floor.

Ceiling fan clearance is probably the most important of them all when it comes to airflow efficiency. Insufficient space between the ceiling and the fan prevents the optimal volume of air from getting into the blades. This can decrease the efficiency of a fan by a quarter, which is a significant amount.

Floor clearance, on the other hand, is mainly determined by safety considerations, which we will discuss shortly).

Now that we’ve spoken about being too close to the walls, ceiling, and floor, let’s look at the other side of the coin.

If the fan is too far away from the floor, then the stream of moving air, which is what cools you, will not actually reach you or, if it does, it will be too weak to perform its function.

In addition, when it comes to fans with a winter mode, there is such a thing as too far from the ceiling.

In order for a ceiling fan to move the hot air hugging the ceiling, it has to be close enough to properly “catch” this hot air in its blades. In cooling mode, any air caught is used, but the supply of warm air is limited and located in a very specific place, making it a more exact science, so to speak.

I have written a Complete Guide to Ceiling Fan Airflow if you want to learn more.

Floor clearance is imperative for your safety. A fan that hangs within the floor clearance zone is also hanging in your head space. This clearance is the estimated amount of space needed to keep taller people safe in a room when the fan is on.

Not only that, but even if you won’t come face-to-face with the fan blades, injury is still possible. In the same way that rollercoasters are designed for you to have more fun while raising your hands, fan clearances also consider that you might need to lift your arms at some point.

Additionally, if your fan is too close to the ceiling or wall, it can damage both the fan and your house. The fan’s blades can knock into the ceiling if they wobble or bend, and if they are too close to a wall, you wouldn’t need any speed wobbles to cause collisions.

Ideally, your fan blades should hang 8-9 ft above the floor. This clearance allows the fan to operate safely while still having enough space to circulate air around the room properly.

The minimum floor clearance is 7 ft, so 7-8 ft is still an acceptable clearance for low ceilings.

For a higher ceiling, you should still use the optimal clearance, or you can opt for a higher placement between the ceiling and floor clearance.

Please note that going above 9 ft will impact the efficiency of the fan.

The recommended clearance from a wall is 18”.

Keep in mind that you also need to ensure there is sufficient distance between any wall furniture or fixtures. So, don’t measure the fan 18” from the wall when you have a shelf.

You also need to keep your fan away from any other fixtures on the ceiling; the recommended distance here is 39”.

If you turn a blade to point directly at the wall, the distance between the tip of the blade to the wall surface is the measurement you are looking at.

When installing multiple ceiling fans, you can also use of 18″ as the absolute minimum distance that there should be between the units.

For optimal performance, your ceiling clearance should at least be 8”.

Going much beyond this range is not recommended since it influences the fan’s performance, but you don’t always have a choice when it comes to ceiling height.

When it comes to flush mount fans, 6-10” is an acceptable clearance. However, the closer you can stay to 8-10”, the more efficient your fan will be.

Do you follow the ceiling or floor clearance in a very tall room? Well, it’s up to you. You can choose to prioritize one clearance over the other.

You can extend the fan down to the optimal floor clearance, making it more effective at cooling the room and easier to access for cleaning, repairs, and operation. However, this can also cost you the spacious feeling of a tall ceiling and winter mode efficiency.

Alternatively, you can go with the optimal ceiling clearance, making the fan more effective in winter mode and less likely to cause injury. However, you will be giving up cooling efficiency.

If you are looking for the best installment for a fan that can function for both heating and cooling, you need to find the middle ground.

For the fan to be able to function for both temperature settings, you need to divide the distance between the ceiling clearance and floor clearance to find the midpoint. It is worth noting that while this is the optimal middle ground, it will not result in the most optimal functioning for either setting.

In my opinion, if you only have a ceiling fan in the room (i.e., there is no HVAC feed, heater, or wall AC unit), the go opt to hang the fan according to the floor height. In such a scenario, the heating benefits of the ceiling fan will be insufficient to sacrifice the cooling effects.

Most ceiling fans are designed for two different installments: a standard mount and a flush mount. Typically, the standard and flush mount fans are the same product but are installed differently, with either a downrod or directly against the ceiling.

If you have a fan that is not specifically a hugger mount, then you should be able to remove the fan, install a downrod, and then rehang the fan. This is only an option if your ceiling is high enough to accommodate the extra length the downrod adds.

If you have a room with a tall ceiling and are trying to lower the fan, you can get an extender rod. This can be done with a standard mount fan, but you will need to specifically order an extender rod, which is the longer version of the standard downrods. Extender rods are available in lengths of 6-120”. 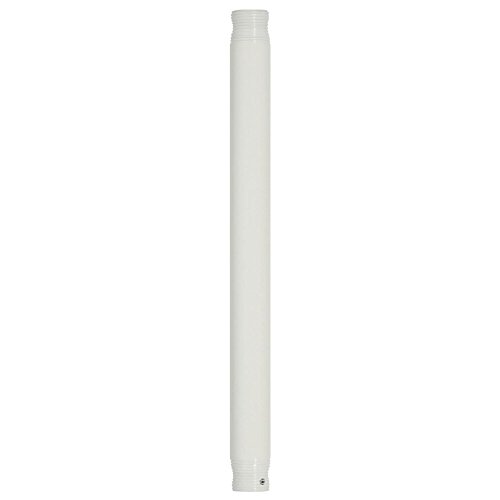 Can You Shorten Ceiling Fan Blades?

You can shorten the blades of a ceiling fan if they are too long for the room. However, this is a complicated process that requires precise cutting, and you will need to re-balance the blades.

If you choose to shorten the blades, you will need to cut them all to the same length, smooth the cut edges, and weigh and balance the shortened blades.

An unbalanced fan is a fan that won’t work well. Remember the previous section on safety where I mentioned wobbling? Well, this most often occurs when a fan is unbalanced.

An unbalanced fan is dangerous. The clearances are intended to be safe for a balanced fan, meaning even those wobbles will happen within a more controlled space.

So, while it is possible to shorten the blades of a ceiling fan (which is particularly helpful when repurposing an appliance), if you have the option to get a fan that fits already, it would be much more convenient and a lot safer.

Since there is an optimal ceiling clearance, the downrod is the better option where possible. This is the standard fan mount, which comes with a 3-6” rod. It will offer the best functionality as the downrod allows the ceiling clearance to be as close to the optimal distance of 8” as possible.

In a tall room, a downrod is likely the most suitable option (with an extender rod).

However, a downrod fan is not always an option. For example, there are cases where lower ceilings prevent the use of a downrod fan because it would not have the necessary 7 ft of floor clearance.

Should the perfect clearances be found in a spot that has no convenient stud for installation, you can try the alternative method detailed in How to Hang a Ceiling Fan Without a Stud.