So, you just have to switch your ceiling fan mode to the corresponding season, right? Summer mode for cooling, winter mode for warming? Well, yes—mostly. It also depends on other ventilation factors in your home.

Unfortunately, the direction guidelines do not necessarily apply to getting the most from the combined efforts of your HVAC system and a ceiling fan. Adding the operation of your HVAC vents and registers into the mix can make things a little more complicated. However, once you understand your aim and the layout of your ventilation, it should clear things up.

Registers are vents that supply air to a room. In addition to registers, you also get return vents, which remove air from a room.

In order to make this article as thorough as possible, we will be looking at ceiling fan with ceiling registers (air supply vents) and ceiling vents (which will, for the purposes of this article, refer to return vents).

So, if registers supply air to a room, cold air will be fed through them during the summer. Ceiling registers, or registers in the upper part of the room, are great at this job since the supplied cool air can naturally sink into the space where you are.

A ceiling fan can enhance the downward flow of cold air when it spins counterclockwise (there are a few ways to confirm the fan is rotating in counterclockwise direction), taking the air from above the fan and pushing it out below the blades.

Counterclockwise rotation is also known as summer mode on a ceiling fan, so this makes sense to use this direction in summer.

There is a misconception that running your ceiling fan while the AC is on is a waste.

In actuality, it allows for better air circulation. It helps to increase the efficiency of your HVAC system as it cools by properly mixing the air in the room. This way, the whole space can be cooled without the AC needing to work as hard to achieve it.

Along with circulating cold air, the fan also directly contributes to cooling you. The wind chill created by the fan’s airflow removes body-heated air from around you and adds to the feeling of being cooler by a few degrees.

This means that you can still combat the heat, but you can do it without needing to drop the thermostat as low.

Since having your fan on helps keep you and the whole space cooler, the benefits are worth the minimal extra cost of running it. Operating the AC and fan together can even help save on utilities and energy usage.

In winter, your HVAC system provides warm air to the ventilation system, meaning your registers will supply furnace-heated air to the room.

Now, since hot air rises, ideally you don’t want it coming out of the ceiling registers as it would only stay in that upper portion of the room. The warm air won’t come down to the occupied space of the room without a little intervention.

Provided you have a reversible ceiling fan, you can switch over to the winter setting to provide such an intervention.

In this mode, the fan will rotate clockwise, pulling air up from below and pushing it out above the blades. Thus, a clockwise direction disperses the warm air layer from around the ceiling and forces it into the lower, occupied portion of the room.

The winter mode on ceiling fans is generally regarded as the weaker setting, unless it is combined with a heat source. This is why I see a heating system plus a ceiling fan as the ultimate team.

You are getting hot air channeled into the room, and then the ceiling fan moves it down into the space where it will be the most beneficial for you. You can actually make use of the heat instead of it sitting at the ceiling where it was delivered.

The fan will also increase the effectiveness of the heating system by circulating the air. As the airflow balances out the temperature in the room and pushes the warm air towards you, you likely won’t need to set your thermostat so high.

This, combined with a lighter demand on furnace air, can increase your savings in both cost and energy.

How you use a ceiling fan in conjunction with vents is determined by where the registers are.

To have ceiling vents is a very good idea in summer. 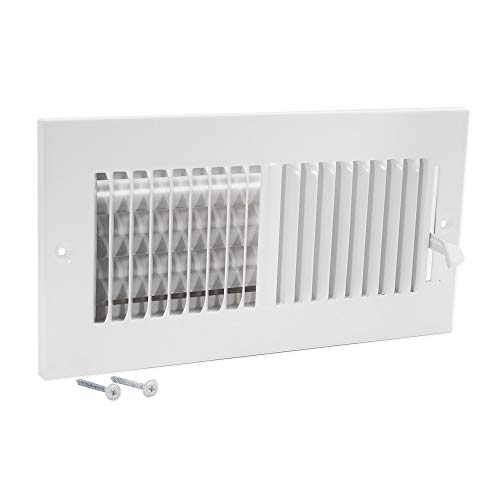 In summer, you want to get rid of hot air. Having ceiling vents will remove the hot air that naturally rises to the ceiling, leaving more space for cool air to enter the room.

Registers on the Ceiling as Well

With ceiling registers as well as ceiling vents, you should set your fan to summer mode. By rotating counterclockwise, the fan can enhance the distribution of air down into the occupied space.

In summer mode, your fan will push the cool air from the registers down into the lower part of the room, where it will make the most difference to you. The hot air naturally rising to the top of the room around the walls can also be channeled out the vents.

Registers in Lower Half of the Room

If you have ceiling vents and your registers are installed in the lower part of the room, you might get the best result from switching your fan onto winter mode even in summer.

The ceiling vents actually remove the hot air around the ceiling before the fan can displace it. Without the warm air around to be distributed through the room, the clockwise rotation of the fan will mainly help to pull the cool air from the low registers up through the whole room.

With winter mode, you do lose the advantage of wind chill as airflow is no longer directed over you. Using the fan for air circulation instead of cooling is still a good option when working in tandem with the AC system.

However, if you feel the effects of wind chill are more important than the even distribution of cold air, you can stick to the counterclockwise setting.

To have vents on the ceiling in winter can be a good or a bad design, depending on where your supply registers are.

Registers on the Ceiling as Well

If the registers are on the ceiling, then it’s not a good design. This is because the warm air your HVAC system is providing will enter at the ceiling, will stay in the upper portion of the room, and will then be removed again by the ceiling vents.

Thankfully, a ceiling fan can save the day in such a scenario. By setting your fan to rotate counterclockwise (summer mode), the air from around the ceiling will be pulled into the fan and pushed out below the blades. This can push the warm air down into the occupied space of the room before the vents remove it.

The only flaw with this is the wind chill factor. However, if you set your fan to a lower speed setting, you can prevent the creation of too strong a draft, mitigating your experience of wind chill.

Registers in the Lower Half of the Room

Ceiling vents in winter are a great design when your registers are in the lower half of the room. Hot air is supplied from a lower point and naturally rises upward through the room to where the vents remove it.

As you add warm air into the lower part of the room, you are also forcing the cold air up through displacement to where it can be removed by the ceiling vents. You will want your fan on winter mode to make the most of this design.

With the clockwise rotation of winter mode, your ceiling fan can help pull cold air up to vent out and will also help to pull the supplied warm air throughout the space.