A noise while your ceiling fan runs is annoying. All noise and no spinning is just rude!

There are several different reasons why your ceiling fan may be humming but not turning. Below we discuss these reasons, and we also provide you with solutions to all of them.

Humming is notoriously indicative of something electrical.

This may be normal humming that occurs when the fan is on and which results from electromagnetic interference in AC fan motors. Alternatively, the humming may indicate a problem with the electrics.

To know which is which, it all comes down to change.

If your fan wasn’t prone to making noticeable humming noises, then any humming noise that you can hear could indicate an issue. If the humming becomes louder, deeper, or shriller, then this is also a sign that something has changed, and likely not for the better.

Humming without turning most likely means that there is a breakdown in the translation of electricity into movement and normal humming may become problematic humming.

Don’t Use the Fan to Prevent Further Damage

One caution before we get to the reasons why a fan may be humming and not turning:

While you attempt to figure out the problem, be sure to turn the fan off immediately. Don’t leave it on in hopes that whatever is stuck will come loose and the blades will start turning again.

Trying to use the fan when it is malfunctioning is a waste of both electricity and money.

Depending on the issue, keeping the fan on may also exacerbate the existing problem and generate damage that is expensive to repair.

Reasons the Ceiling Fan Is Humming but Not Turning

Over time, however, these ball bearings can become stuck, particularly if they are supposed to be manually lubricated and haven’t been for a while.

When the motor is trying to rotate the blades but this energy output is not being translated into rotational movement, then the hum develops or intensifies due to strain.

The best way to fix this issue is to replace the ceiling fan bearings.

If you want to replace the ceiling fan bearings on your own, be sure to purchase a new set (amazon link) online or at your local hardware store. However, it’s quite a complicated process and I would recommend getting it done professionally. 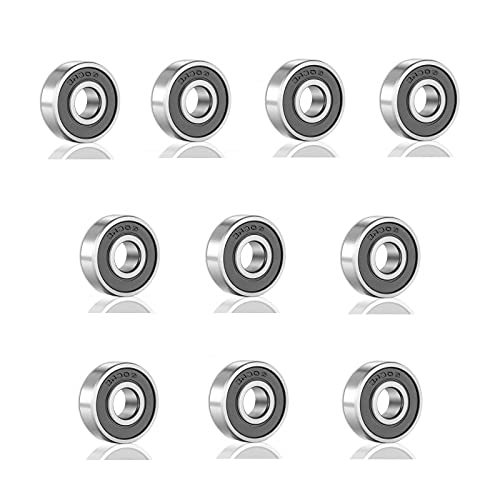 Fan’s Direction Switch Is Stuck in the Middle

Most ceiling fans have a switch that allows you to choose in which direction the blades rotate (clockwise or counterclockwise). The change in direction allows the fan to serve different functions in summer and winter.

On some models, this switch can get stuck in a neutral position. The fan will hum because the motor is running but the blade won’t move because the electrical output is not being translated into work.

If your fan is new, it may have come out of the box that way.

To check if this is the problem, take a look at the switch. The switch will be located on the fan’s motor housing. Sometimes it is not immediately visible, so turn off your ceiling fan and take a good look. It can also be inside the light fitting (beneath the shade).

Once you have found the switch, check its positioning.

If it is squarely in the middle, simply flip the switch one side or the other. This should stop the humming noise and allow the fan to function normally.

If your wall switch is a dimmer switch because you want to control the intensity of the light output of the ceiling fan, then this could be the issue.

This will be problematic because the dimmer settings may not supply enough power to the motor to actually turn the blades. More seriously, this is a potential fire risk.

In such cases, you will need to replace the dimmer switch with a regular switch or a dual switch.

Loose wires are another possible reason why your ceiling fan is humming but not turning. Loose wiring connections are most often the result of incorrect installation.

This issue is mostly seen in newly installed ceiling fans because if the fan was working, then the wires were installed correctly.

A loose wiring connection means that the fan is being supplied with power, so the motor hums, but the connection to the blade rotation is loose and, therefore, too intermittent or weak to rotate the blades.

Once you have a clear view of the wiring, tighten all of the wire connections with a screwdriver.

After that, screw on the motor housing cover and replace the ceiling fan blades. Finally, make sure that the issue has been resolved by turning on the fan.

If you are uncomfortable with tightening the wiring connections, then you can hire a professional to do it for you.

If your ceiling fan motor is dirty or old, then it may not function at its best.

The humming will likely be pronounced and it may get to the point where the blades no longer turn, but this is not going to happen without the warning of the louder hum.

If your ceiling fan is more than 10 years old, this could be your sign to replace the fan with a newer model.

It may not be time to replace your fan, though. Take the motor housing off (make sure the breaker is off first!), and give the interior a good clean with the vacuum cleaner or a dust cloth.

The majority of ceiling fans available today have a capacitor whose job is to provide enough torque to overcome inertia and set the blades on their rotating course. If the capacitor is broken, then the motor is being powered, but this is not being translated into movement, so you hear a hum but the fan does not spin.

The solution is to replace the capacitor, but only if it really is the problem. You can determine this by turning the power to the fan off at the breaker, removing the blades from the fan body, and unscrewing the housing cover. This will expose the capacitor, which you can test with a multimeter to determine if it’s working.

If it is not working, you can proceed with replacement. Below is a video description of this process:

Finally, the issue may be caused by a faulty remote receiver. This connects the fan mechanics to the power supply, so if it is defective, it may not be powering the fan as it should be.

Happily, remote receivers are relatively easy to replace if you know a little about wiring. You will also have to replace the remote. You can get a manufacturer-specific set, but often the generic universal ones (amazon link) are sufficient.

Here is a helpful video: