Having a ceiling fan sitting flush against your vaulted ceiling, way above your head, would look pretty silly. But more than that, its ability to generate good airflow and push it into your space is compromised.

When it comes to ceiling fans, they can definitely be installed too high. Furthermore, there are two different definitions of too high. The fan can be too close to the ceiling and too far from the occupied space of the room.

A minimum of 8" between the fan and ceiling and a maximum of 9′ floor clearance are recommended. Going beyond this impacts the fan’s efficiency. However, in the case of taller ceilings, the recommended floor clearance can be exceeded by up to 2′, albeit at the cost of some of the fan’s performance.

Contents show table of contents
Less Than 8” From Ceiling Is Too High
More Than 9’ Above Floor Is Too High
What About High Ceilings?
Not Too Much Higher
A More Powerful Fan Is Required
Efficiency Is Sacrificed
What Is the Longest Available Downrod?
Sources
Was this helpful?

Less Than 8” From Ceiling Is Too High

The ideal distance between the fan and ceiling is at least 8”, measuring from the ceiling to the fan blades.

The recommended range is 8-10” and is the common clearance associated with standard (downrod) mount ceiling fans.

This ceiling clearance is the optimal distance to allow enough air to be moved down into and around the fan blades and to prevent the loss of energy to turbulence as the air bounces between the ceiling and the fan blades.

So, when you hang the ceiling fan too high and decrease the clearance, you start to reduce the efficiency of the ceiling fan. This is actually what happens with flush mount fans, which are installed with an average clearance of 6-8″.

However, this mount (including hugger mounts) is designed to be in this lower range because it addresses the safety of floor clearances with a lower ceiling. To fit the fan into a smaller floor clearance, you need to compromise on the ceiling clearance and, therefore, how well the blades can pull air in from above the fan.

Less than 8-10″ should not be given unless absolutely necessary for safety.

More Than 9’ Above Floor Is Too High

A ceiling fan cannot be within 7’ of the floor for safety purposes.

Floor clearance is what impacts the effectiveness of your fan the most. This is because the fan needs to be within the range of 8-9’ from the floor to perform the cooling function of blowing air down into the room.

There is no rule that prevents you from hanging a fan more than 9′ above the floor, but in doing so, you should be aware that you will be paying for the cost of a fan that does not work as well.

What About High Ceilings?

It is not uncommon for some of us to have higher ceilings. In fact, vaulted or cathedral ceilings are a great design point and can make a room feel open and grand. However, this might mean we can’t stick to the 9′ clearance.

This isn’t a catastrophe; a higher fan can still be functional, but there are some things to consider and a few consequences to the additional height.

Not Too Much Higher

The most optimal floor clearance for your ceiling fan is 8-9’. This keeps the fan well above the 7′ minimum rule of floor clearance for safety while keeping the fan within reach of the lower, occupied section of the room. A fan needs access to the different areas of air in a room to act on them properly.

However, you can exceed the optimal to a certain extent. This does affect the efficiency of your fan, though.

Most people purchase a fan for the cooling (summer) setting and not the winter one (where the direction is reversed and cold air is drawn up to displace warm air down into the room). To get the most out of the cooling function of the fan, you need to prioritize the floor clearance.

If you would prefer a balanced look to the room, you can find the middle between the floor and ceiling clearance. Hanging your fan here will allow it to perform both the summer and winter settings, albeit at reduced efficiency in general.

A More Powerful Fan Is Required

However, there is a difference between slightly oversized and too big!

You could also look for a slightly steeper blade pitch; domestic fans generally come in a range of 10-15°, so you could find one on the upper end of that scale.

A steeper angle can increase efficiency and airflow by narrowing and concentrating the stream of downward air into a smaller area. On the other hand, the more blades are pitched, the more likely the fan is to wobble, meaning it’s important to have sufficient ceiling clearance.

Yes, safety is a reason for ceiling fan clearances, but they are also designed to help you get the best performance from your fan. To compromise too much on the recommended clearances means you are sacrificing efficiency.

Even with the ceiling clearance, the flush and hugger mounts are a solution to a low ceiling, but this makes them less efficient because there is less space for the fan to move air into the blades at 6-8” than there is with 8-10”.

This is the same for the floor clearance; a little extra room in between the floor and the fan blades may not seem like a big deal (you even have a little extra safety room, right?), but the further you move from 9’, the harder it is for the fan to blow air all the way down to you.

If the air is not reaching you properly, you are not getting the most effective fan as the fan can only cool you down by making air flow past you.

What Is the Longest Available Downrod?

The standard downrods come in a range of 3-6”. You can order extender (or extension) rods in a range of 6-120”. These extender rods are specifically designed for extended mounts with higher ceilings or for angled mounts on sloped ceilings. 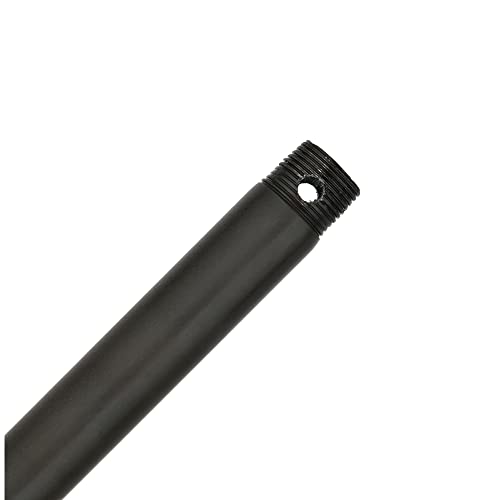 These longer downrods enable you to install a fan within the optimal floor clearance range in order to get the most out of your fan’s cooling function, even if you have a very tall ceiling.

The problem is that this can compromise the spacious look of your room by artificially lowering the ceiling because the fan boxes off the openness.

Placement is just one of the factors influencing ceiling fan airflow, you can read about some others in my post about airflow determiners.