AC or DC describes the way that a ceiling fan gets its power. AC currents change direction periodically while DC currents move in the same direction all the time.

Because the difference is in the way that the current moves—something we can’t see by just looking at the fan—we have to find other indicators.

Product boxes and online specs state AC or DC. Fans with more than 3 speeds are likely to be DC. AC fans are cheaper than DC ones with similar specs. Current converters, needed for DC fans, are often visible in the wiring setup. Chain switches are more common with AC. Fans over about 10 years old will be AC.

Contents show table of contents
Look at the Box
Find the Fan Specs Online
How Many Speeds Does the Fan Have?
The Price Tag Will Be a Good Indicator
Can You See a Converter in the Wiring Set Up?
What Is the Primary Operational Style?
How Old Is Your Ceiling Fan?
Sources
Was this helpful?

Look at the Box

A great place to find out the current type of your ceiling fan motor, is the box in which the fan came in before it was installed.

If it is DC, then the box should say this quite clearly. Manufacturers like to use the fact that a fan is DC as a major selling point for the product because there are certain benefits associated with this current, so they won’t make the information hard to find. Sometimes, DC is even in the fan’s name.

If you aren’t seeing DC clearly indicated on the box, then it is likely AC.

Suppose you don’t have the box the fan came in. Perhaps you moved into the place and it was already there, or you simply discarded the box without a second thought. However it happened, there is always another way to find the necessary information.

If you know where the fan was purchased, and if it was purchased relatively recently, then you can simply go onto the store’s website and check. The pictures can help you find your fan online, and the product information will say whether or not it is DC.

You can also search the manufacturer’s website if the online store does not sell the product anymore or if it lacks that information.

How Many Speeds Does the Fan Have?

If you are not really that keen on doing research on the product, you can simply inspect the fan and its remote for the number of speed options that it has. If the fan has more than 3 speeds, it is likely a DC fan.

AC ceiling fans do not provide more than 3 options for speed as their speed depends strongly on the frequency and amplitude of the direct power source. These motors tend to have difficulty in maintaining speed for a long period of time, which is why manufacturers will keep the options to a limit.

The DC ceiling fan motors are manufactured in such a way that the user does not have to depend on the power source for speed. The user will have control over the speed that you desire, with some DC fans giving the user as many as 6 speed options.

The Price Tag Will Be a Good Indicator

Another sure-fire way to determine whether your fan is AC or DC, is to simply consider how much the fan cost you when you bought it, or what it costs on the shelves.

DC fans are going to be significantly more expensive than an AC version with otherwise similar specs. AC fans are more affordable due to the fact that they are easy to manufacture, and do not require much maintenance from the user.

Since DC fans are still relatively new to the ceiling fan market, they are not as cheap to produce and manufacture, so you will be paying more. Despite their price, many suggest that these fans are a lot more efficient and can end up saving you money on your energy bills in the long run.

Can You See a Converter in the Wiring Set Up?

You can also distinguish between an AC or DC ceiling fan by investigating whether or not you can see a converter in the wiring setup. The electrical mains of domestic residences supply electricity in the form of AC.

A DC ceiling fan will need to have an AC to DC converter either built into the motor or connected separately between the power source to the fan in order to function.

What Is the Primary Operational Style?

Additionally, you can also tell if a fan is AC or DC depending on how you can operate it, i.e.., how you turn it on and off or adjust the speed. This is not a completely foolproof method because there is overlap, but it does warrant mention.

Since AC fans have limited speed control settings, they are likely to have a chain operation (you can simply tug the chain to adjust the speed) or wall switch to make the fan run or cease the operation. DC fans are almost never chain-operated. Instead, they use remotes. 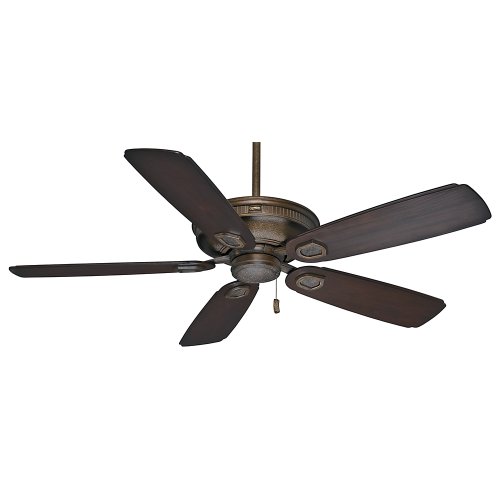 However, we cannot say that all fans that use remotes are DC fans because it is very common for AC fans to be remote controlled as well. A better way to look at it would be to say that if the fan has a chain switch, then it’s probably not DC.

How Old Is Your Ceiling Fan?

Suppose you have moved into a house with an existing ceiling fan and you can tell it’s been there over the course of a couple of design trend changes. Or perhaps you were the one who installed the fan years and years ago. In such cases, you can assume that the fan is AC.

Since DC fans have only come into the market in the last decade or so, your 20-year-old fans are not likely to be DC. However, you can still get new AC fans, so don’t just assume that just because it isn’t old, that it is DC.