Have you ever considered having a ceiling fan as a centerpiece for your dining room table? Of course not! That’s because you want your ceiling fan to stay put right where it belongs–in the ceiling.

So, whether you want to protect the world from falling ceiling fans, or you (more likely) just want to make sure your home or business is up to code, read on to understand how you can determine if an existing junction box is fan-rated.

A junction box should say if it’s fan-rated. It must attach to a joist, so it won’t jiggle, it will be secured with wood screws, and it may have a groove that slots over the joist. It can be braced between joists, identified by machine screws and shallow grooves in the box. A brace is visible in the attic.

Contents show table of contents
Does It Have to Be Fan-Rated?
The Box Should Say if It Is Fan-Rated
Old Junction Boxes
Fan-Rated Boxes Are Attached to Joists
Does It Move When You Jiggle It?
What Fastener Was Used?
What Shape Does The Box Have?
Are There Joists Around It?
Is the Box Braced Between Two Joists?
Sources
Was this helpful?

Does It Have to Be Fan-Rated?

The best junction boxes for ceiling fans are fan-rated. This means the manufacturer has designed and tested it to support the weight of a ceiling fan that weighs 35-70 lbs (16-32 kg).

However, you may not need a fan-rated junction box if your ceiling fan weighs less than 35 lbs. Fortunately, most ceiling fans out there weigh less than that. You can easily find options made by trusted brands that fit different styles and budgets:

However, let’s say you’re set on a ceiling fan that’s heavier than 35 lbs or you just want to make sure that a lighter ceiling is extra secure. In both cases, you’ll need to check whether or not your junction boxes are fan-rated.

The Box Should Say if It Is Fan-Rated

However, the National Electrical Code (NEC) 314.27 (c) requires manufacturers to state directly on a junction box that it is acceptable for supporting ceiling fans. Therefore, the easiest way to tell if a junction box is fan-rated is to look inside it.

This is easy if you have access to an attic, in which case you could simply look for a manufacturer-provided label, either on a sticker or molded/stamped directly into the material, usually on the interior of the junction box.

Sometimes, manufacturers conveniently place the label on the down-facing side of the junction box, so even if you don’t have attic access, it’s worth getting a step ladder and flashlight to check from below (you will have to unscrew the canopy to see the junction box.

You might see the following phrasings on a label:

If the junction box was installed before 1987 (before the NEC required fan-rating), it might or might not hold the ceiling fan that you want to install. In this case, it’s best to play it safe and replace any older junction boxes that old with new ones you know are fan-rated.

If you suspect that the junction box you’re looking at might be from 1987 or earlier but you aren’t sure, you should be able to find records of past work and building permits through a local government office. In the US, depending on where you live, these records may be held by the town, city, or county level of government.

Fan-Rated Boxes Are Attached to Joists

A fan-rated junction box will always be attached to joists. This allows the boxes not only to securely support heavier fixtures, but also to remain firmly in place even when exposed to the constant centrifugal force of spinning fan blades.

Based on this fact, there are a couple ways that you can test if the box is fan-rated (my advice would be to look for as many signs as possible before concluding that your box is fan-rated).

Does It Move When You Jiggle It?

Because fan-rated junction boxes have to withstand so many different forces, you can perform a simple test: just try to jiggle it with your hands. If it moves at all, it is not fan-rated and probably not attached to a joist.

What Fastener Was Used?

Another quick way to identify junction boxes that are not fan-rated is to examine what kind of fastener they’re secured with. If the box is not attached with wood screws, then it is likely not fan-rated.

However, not every junction box attached to a joist with wood screws is fan-rated, so if you find wood screws, you should investigate a bit further.

What Shape Does The Box Have?

On smaller fan-rated boxes, you may notice a protrusion inside the box matching the shape of the joist.

To visualize it, pretend you have an empty tuna can. Imagine what it would look like if you hit the bottom very hard with a thick, four-sided rod right down the center. The junction box mentioned above would look something like the result.

Sometimes, the groove is on one side of the junction box. In this case, imagine the same tuna can. Now imagine you hit it on the bottom with the same thick, four-sided rod, but this time, instead of the center, you hit the edge of the circle. The second type looks something like that.

Are There Joists Around It?

If you want to be really sure that the junction box is attached to a joist, you should use a stud finder. These handy tools locate studs and joists by using magnets or electronic sensors.

Here are some stud finders made by reputable brands that are sure to precisely locate ceiling joists: 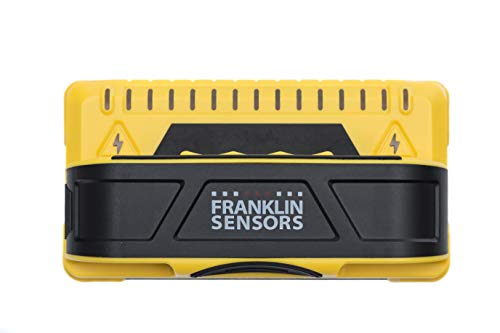 A stud finder will tell if there are any joists near the junction box. If not, then then it’s likely not a fan-rated box (which has to be secured to a joist). Fan-rated boxes will either align with a joist, or lie halfway between two joists, which brings me to my next section.

Is the Box Braced Between Two Joists?

Fan-rated junction boxes can be attached to two joists. The box attaches to the center of a bracket that connects to two separate joists at each endpoint.

You should be able to see the bracket from above if you have access to an attic. From below, however, note that you may not see wood screws since it attaches directly to the metal bracket (look for machine screws, instead). From this angle, you should see two screws going up through the foot of the box.

Remember, if you still can’t identify whether or not your junction box is fan-rated, don’t hesitate to contact a professional electrician.