Some LED bulbs can be used in ceiling fans. Check that the dimmer switch is compatible with LED bulbs and the bulb itself is dimmable. Not all LED bulbs work with a ceiling fan remote control. The ceiling fan should be balanced to minimize vibrations. The light fixture should not fit tightly over the LED bulb.

Saving the environment and saving money—the enticing properties of LED light bulbs that have more and more people ridding their homes of dated incandescents. It can be tempting to switch out all of the bulbs in your home for LEDs, and indeed, they can be installed in most places. However, there are still certain fixtures, like ceiling fans, which may require extra consideration before making the switch.

Depending on the properties of your light fixture as well as the bulb itself, several problems can interfere with the lifespan and efficiency of an LED bulb after installation in your ceiling fan. To better understand how you can reap the benefits of LED lights while preventing damage, continue reading to discover what features of your ceiling fan could potentially cause problems.

Why Can’t Some LED Bulbs Be Used in Ceiling Fans?

LED bulbs have become increasingly more common, and with that comes more variety. Based on the properties of your fan, it is best to be particular about which bulb you choose.

The type of bulb that can be placed in a ceiling fan comes down to the features of the fan itself. If your ceiling fan operates on a dimmer, the only LED lights that should be installed are those that have dimming capabilities.

Dimmable LED bulbs used to be very expensive since their circuitry is more complex compared to the non-dimmable versions. Since the technology has vastly improved dimmable bulbs can be produced for a fraction of the price compared to say 10 years ago.
Tip: Buy in bulk. Buying a single bulb is often up to 30% more expensive! 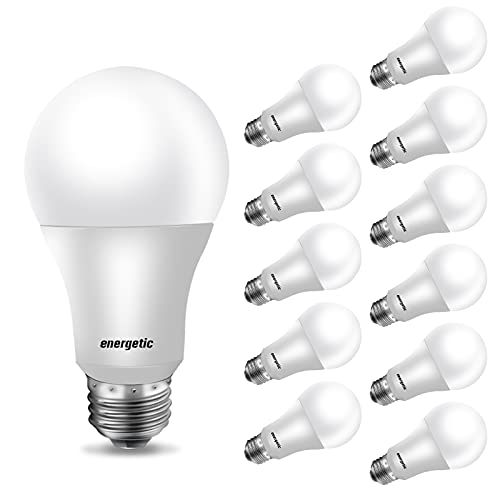 Even then, you need to make sure the dimmer switch itself can function properly with the bulb. LED lights often need a dimmer specifically designed for their use. If you’d like to learn more about LED bulbs and their dimming compatibilities, here is a helpful video:

Dimming the lights can be great for the ambiance of a room, but it is best to think twice before changing out your old bulb for an LED if your ceiling fan is connected to a dimmer switch as this could damage the new bulb and affect its lifespan.

Dimmer switches are not one-size-fits-all.

Attempting to use the same dimmer switch that worked for your incandescent, halogen, or CFL bulbs with a standard LED likely won’t produce the same results. Simply put, LEDs work by responding to electrical currents sent to them. When you mess with the voltage being sent to the bulb, it can respond by flashing and eventually dying out.

For people who suffer from light-sensitive epilepsy or similar conditions, this flashing can be considered a health risk, not just harmful to the light bulb.

You should note, that not all dimmer switches are appropriate for use with ceiling fans, and using the wrong dimmer can be extremely dangerous. It puts strain on the fan motor, which can cause damage, overheating, or even fires. This would also affect the LED bulb that was installed in the ceiling fan unit.

Unfortunately, LED lights do not always work the way they should, if at all.

Remote controls can be a convenient option for turning on the light compared to reaching to yank a chain, but the technology can be picky about the bulb used. If your ceiling fan is operated by remote control, you may run into difficulties when switching from an incandescent bulb to an LED.

Often, ceiling fan remotes require more wattage to operate efficiently than LED bulbs can offer. If you are able, using a pull chain to turn on the lights is typically the best option in this scenario.

Frustration can arise after you’ve invested your money and time into installing a new light bulb, just for it to blow out days later. LED bulbs may seem smart, but they’re also sensitive. Awareness of what features of your ceiling fan could hurt the bulbs is the first step to preventing the damage.

As I have already mentioned, the varying voltage created by dimmer switches can reduce the lifespan of LEDs that are not designed to be used with a dimmer switch. Vibrations and enclosed light fixtures can also cause LED bulbs to die prematurely.

If your ceiling fan looks like it’s about to fly off of the ceiling when you run it, or if you just run it often, this can damage the bulb due to the vibration. Before you replace the bulb, it is a good idea to balance the fan blades to make sure the vibrations won’t damage the new bulb. As a bonus, the fan will also be much quieter after balancing.

Generally, newer ceiling fans run pretty smoothly and probably won’t create a concerning amount of shaking and vibration. If you notice the spinning from the blades is causing significant movement throughout the entire fixture, the structure of an LED bulb may not be able to handle it.

LED bulbs can be a tad claustrophobic and perform best with some room to breathe. Thus, the structure surrounding your light bulb can factor into damage potential.

If the light bulb in your ceiling fan is tightly covered by a light shade, for example, the lack of space for air circulation can cause the circuit to overheat. As a result, the bulb may flicker or die out prematurely. There are options for LED bulbs that are manufactured specifically to work in tight closures as a solution to this issue.

As a general rule, whenever the bulb is in a small space where ventilation is poor use a lower wattage bulb to prevent premature bulb failure due to overheating.

If you can manage to account for all these pitfalls, then using LEDs in your ceiling fan can be a great method of reducing the cost of running your ceiling fan, even if you choose to run it 24/7.

Incandescent and LED Bulbs in the Same Fixture

Installing a mix of incandescent and LED lights in a ceiling fan is generally not a good idea, especially if your light fixture is enclosed. The common trend among all problems that lead to LED bulbs being damaged is heat; the excess energy given off by incandescents can cause LED lights to fail.

Today, candelabra light sockets are widely used in ceiling fans. Candelabra bulbs are smaller and designed to look nicer than the previously popular standard bulbs that use E26 socket.

They are also, arguably, more geared towards aesthetics as they come in a variety of colors and more natural-looking styles.

Regardless of whether or not LED lights are used, the candelabra style sockets initially became widespread after regulations were placed on light fixture production to reduce energy emissions.

Due to their small size, ceiling fans with candelabra style fixtures may sway even more consumers towards switching to LED bulbs. Because of regulations on the number of watts used by light bulbs, incandescents of this style may not provide the desired brightness. LED candelabra bulbs can emit more light intensity at higher lumen magnitudes.

If you have a modern ceiling fan produced for candelabra bulbs, switching to LED lights should not be too much of an issue. That being said, be sure to refer to the points made earlier in the article to be sure you are getting the correct bulb for your fan and avoid issues along the way.

Before the lighting industry geared its focus towards energy efficiency, medium sockets were primarily used in ceiling fans to hold high-watt incandescent bulbs. Because changes were not firmly implemented until a decade and a half ago, plenty of homeowners still have older-style ceiling fans.

Medium-base (E26/E27) incandescent lights have been the standard for these fixtures, but LED lights can still be an option. You may need to search for a bulb significantly high in lumens to match the amount of light power used by medium-base incandescents.

Getting the Correct Wattage Equivalence

You should also know the minimum load requirement on your ceiling fan/dimmer switch. This information can be used to figure out what wattage equivalency you need to get out of your LED bulb. Instead of using watts, LED bulbs measure their light power in lumens.

If an LED light’s power is listed in watts, know that the number is not the same measurement as an incandescent watt (for example, a 4W LED bulb is equivalent to a standard 25W bulb).

How many lumens a bulb has is what really matters; more lumens equates to a brighter light. For example, if you are replacing a 20-watt halogen bulb, you should use a 4 watt LED to get the same amount of light output.

Here is a helpful table for comparing incandescent, halogen, CFL, and led bulbs

To be frank, if you purchase a cheap LED bulb, expect lower quality and a shorter lifespan. Lower-quality LED bulbs are more likely to be impacted by vibrations, heat, and other stimuli caused by the ceiling fan. Purchasing a high-quality LED bulb (on the pricier end) can reduce its damage potential and be used longer to save you money in the long run.

link to Bathroom Fan Condensation Trap: Is it necessary?

Drip-drip-drop is no siren call and is honestly just a pain in the neck. Splashing through puddles is an activity that should be strictly limited to the outdoors. If you are looking to avoid this,...

Continue Reading
link to Can You Smoke in Bathroom With Fan On: Will others notice?

So, you are looking for a secret place to smoke your cigarettes, etc., inside the house. Whether you don’t want your parents, significant other, kids, roommates, or landlord to find out, the...