Range hood duct length and dimension are regulated by building codes. In the USA, the International Residential Code (IRC) is applied, although there are sometimes state-level local adaptations and additions to this code, which would take precedence should they differ from the IRC.

This article focuses on what the IRC says regarding the length and dimensions of range hood ducts. At the end, we will provide you with a link to help you to find the individual state codes so that you can check for any changes that would be applicable in your area.

Where to Look in the IRC

The ducts are how the air is exhausted to the outside and they are required to maintain healthy indoor air quality in a room that produces lots of heat, smells, steam, and cooking by-products.

The dimensions of range hood ducting (length and diameter) as well as the rage hood capacity (measured in CFM) are all interconnected and all influence the way in which kitchen air is conveyed to the outside. First, let’s get a general understanding, then we can look at how the systems are influenced by each of these factors.

Range hoods provide active ventilation. This means that energy is added to a system in order to achieve the goal of ventilation. The range hood exhaust fan is the source of added energy.

As the fan operates, it pulls air from the kitchen and into the ductwork at a certain rate (cubic feet of air per minute = CFM). When the air is inside the ducts, it exists at a greater pressure than it had in the kitchen because the size of the “container” decreased.

The pressure created in the duct will manifest in one of two ways. It will either become velocity pressure, which drives the forward momentum of the air through the ducts, or it will become static pressure, which opposes this movement.

It’s never going to be all one and none of the other, but the ratio of the two makes a difference.

You may be more familiar with the alternative names for static pressure: friction or resistance. Some of the energy given to the movement of the air by the range hood fan is lost to static pressure as the air flows through the duct.

Basically, in exhaust systems, the goal is to minimize static pressure in whatever ways possible.

Technically, the rate of exhaustion, which is calculated at the fan (how much air is removed from the kitchen over a certain amount of time), is not affected by increasing the length of the duct.

However, the efficiency of exhausting air from a kitchen can be seen as how well the air moves through the duct and reaches the outside, where it cannot exert its negative effects.

The longer the ducts (assuming a constant diameter and CFM), the longer it takes for the air to exit the house because it has further to travel.

In addition, the longer the air is in the duct, the greater the surface area on which static pressure can be exerted. This means that the air loses energy and slows down, taking still longer to exit the duct.

The slower the air moves, the more likely it is to deposit contaminants (including moisture) inside the duct.

A wider duct is always more efficient. The reason is that you reduce the percentage of air in contact with the walls of the duct, reducing static pressure.

Let’s assume we have a range hood that operates at 80 CFM.

The same amount of air drawn into a 6″ duct would have more vertical space to fill and would not extend so far into the duct and would, therefore, be in contact with less duct surface area. Less of the energy provided by the range hood motor will be needed to overcome resistance and the air will flow through the ducts more efficiently.

The reason why we don’t all just install really wide ducts is, quite simply, that they take up too much space and are composed of more materials, making them more costly.

As with everything in ventilation, however, it’s not just that simple. In our example, the fan was 80 CFM in both cases. If it were 40 CFM for the 3″ duct and 80 CFM for the 6″ duct, then you are looking at very comparable systems in terms of efficiency because the ratio of static to velocity pressure is the same.

So, the size of the fan will also influence ideal duct diameter.

For interest’s sake, neither a 40 CFM nor an 80 CFM fan is good enough for a range hood. According to IRC Section M1505.4.4, your kitchen has to have an exhaust rate of 100 CFM (unless it operates continuously, in which case it can be 25 CFM). However, 40 and 80 CFM are good enough for our examples.

There is no perfect duct length or diameter for all systems, but there are guidelines on how maximum allowable length is affected by fan strength, duct diameter, and the number of elbows/bends in the system.

All of this information can be found in the IRC, specifically Table M1504.2. However, you should note that the information in the table is for all exhaust systems and not all the data are applicable to range hood exhaust ducts.

The table below is based on the table in the IRC, but it is adapted for range hoods specifically.

The following adaptations have been made:

Looking at the rows in the above table, we can see that maximum allowable ducting length decreases as the fans get more powerful. At first this does not make sense.

However, if you look at the column in the table, you will see that the maximum allowable length of ducting for a range hood with a certain capacity increases with increasing duct diameter.

What this tells us is that the issue with big range hoods and long ducts is static pressure. The more air you are trying to force into a smaller space, the more static pressure is produced. This equates to energy losses and reduced airflow, which means the longer the air travels, the less likely it is to actually exit the duct.

Be aware that these lengths represent what is allowable for completely straight duct runs. If you need to add bends or elbows, you will subtract 15 ft per bend or elbow from the allowable length. 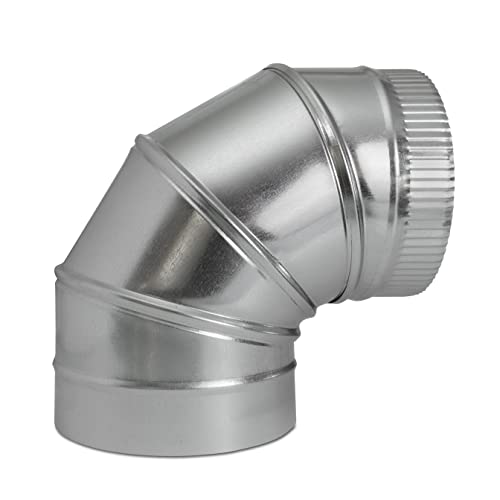 There are other rules surrounding range hood ducts, which you can find in my article explaining the range hood code into easy-to-understand English. And if you are finding all the rules a bit daunting, then why not read about all the great benefits of exhaust hood.