If you are looking for an air purifier, you want something that is going to remove odors, etc., from the air, not add things into the air to make it smell. So, when your new air purifier produces a smell, it can be quite concerning.

If you have read even just a handful of reviews on Reme Halos, you will know that you are not the only one who is experiencing a smell linked to their air purifier. Let’s look at why Reme Halos produce a smell and what this means to you.

Reme Halo air purifiers produce a "fresh" or "clean" smell. This is the smell of ozone that is being produced by the UV light in the Reme Halo. Ozone can be harmful to respiratory health, but the levels linked to properly functioning Reme Halos fall below the toxic levels for a normal, healthy person.

Contents show table of contents
Reme Halo Manufacturers Acknowledge an Odor
Users Report an Odor
The Smell Can Build Up
Does the Smell Fade?
Why Do Reme Halos Smell?
UV Light Splits Oxygen Molecules
Ozone Is the Source of the Odor
Is the Ozone Dangerous?
Reme Halo LEDs Do Not Produce Ozone
Sources
Was this helpful?

Reme Halo manufacturers freely acknowledge that their devices produce an odor, particularly when they are first installed. The odor is described as “similar to fresh, clean outdoor air”. 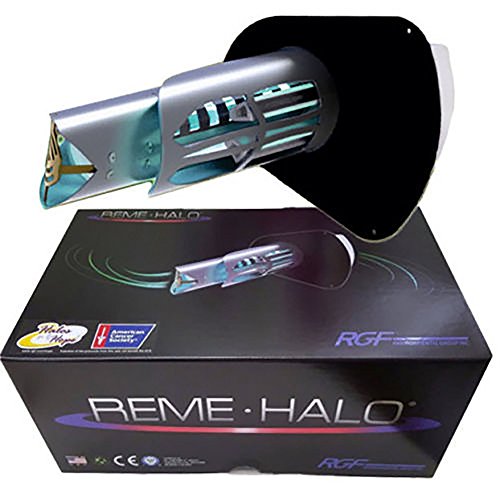 This is obviously not necessarily an unpleasant odor, but some may find it more overpowering than others, depending on the keenness of their sense of smell and their preferences.

Not only do the manufacturers acknowledge that their products can produce a smell, but independent users also confirm that an odor is released when the Reme Halo runs.

Some liken this smell to the smell of a rainstorm approaching or just passed. Others say that it is just a very fresh or clean smell.

Many like this smell because it symbolizes the function of the Reme Halo—air purification. Yet, there are some for whom this smell is unpleasant and they are put off by the fact that the device that is supposed to be cleaning the air in their home is actually putting stuff into it.

The Smell Can Build Up

The smell produced by a Reme Halo can seem stronger if you have not been running your AC fan for a while. This is because the Reme Halo runs continually (or, at least, it is supposed to be run continually).

Does the Smell Fade?

Reme Halo manufacturers do say that the smell should fade after installation. However, there are many people who are concerned that a loss of the odor means that the device is no longer functioning or is not functioning effectively.

Based on the reason why Reme Halos smell, which we will get to in the next section, I can imagine that a loss of the odor could actually indicate that the air-purifier is no longer functioning properly.

However—and this is a big “however”—you cannot underestimate the power of olfactory adaptation. One aspect of olfactory adaptation means that you can stop “smelling” odors that have, themselves, neither stopped being produced nor reduced in intensity. You have definitely experienced this before in your life.

So, while I don’t think that the Reme Halo smell fades over time, I can quite believe that you stop registering it on a physiological level. This is why their indicator lights are a better representation of functional state than the production of smell.

Why Do Reme Halos Smell?

Here we come to the reason why Reme Halos smell.

Reme halos are ionizing air purifiers; you can read how they work in my plain-English explanation of their mechanism of action. What you just need to know here is that UV light is a vital part of this process.

UV light is a form of radiation energy, and it possesses the energy required to split up oxygen molecules into two individual oxygen atoms.

Now, oxygen atoms are considered chemically unstable. This has to do with the number of atoms in their outermost valence shell. I am a little bit of a chemistry nerd, so I find this kind of thing interesting, but because I know that not all people share my views, I’ll keep it brief, while still providing you with a comprehensive explanation.

The electrons of an atom are arranged in shells around the central nucleus, which contains the protons and neutrons. These orbit the nucleus much like the planets around the sun. The electrons in the valence, or outermost, shell determine the reactivity of the atom.

Oxygen atoms have 6 valence shell electrons. One way that these atoms can achieve a full valence shell, is by binding to oxygen molecules. This forms a molecule consisting of 3 oxygen atoms; a molecule known as ozone.

Ozone Is the Source of the Odor

Ozone has a “fresh”, “clean”, or “rainstorm” kind of smell. So, this is what you are smelling from your Reme Halo.

Some air purifiers, known as ozone generators use this gas production as their main mechanism of purifying the air, partly because of the smell. However, these are not considered the safest appliances, so it is important to know that Reme Halos are not ozone generators even though they produce ozone.

Is the Ozone Dangerous?

You have probably heard that ozone is natural and good in the atmosphere, where the sun’s UV radiation causes it to form. However, it’s not that great in the air that we breathe.

Now, don’t toss aside your Reme Halo or intentions of getting one. There is a saying in the scientific and pharmaceutical industry that the only difference between a cure and poison is the dose.

According to a technical bulletin released by the manufacturer of Reme Halos, their products produce only up to 0.01 ppm of ozone. According to the EPA, the FDA limit is 0.05 ppm.

This means that a properly functioning Reme Halo produces ozone but only at levels that are not considered to be problematic or harmful to the average person; the levels are on the cure side or dosage as opposed to the poison side.

I will say that there are circumstances under which the addition of ozone produced by Reme Halos to the indoor air is not desirable.

Furthermore, ionizing air purifiers are not the only devices in a home that can produce ozone. The total production in a single house may reach the limits at which most people start experiencing negative effects.

While the Reme Halo has many pros, and the typical amount of ozone produced is unlikely to be harmful, I consider the fact that it does produce ozone, which has the potential to harm a vulnerable person, a drawback.

The Reme Halo LED is a very similar product to the Reme Halo. One of the main differences is that they use LED light, not UV light and so they do not split oxygen molecules. This means that there are no oxygen atoms to bind to other oxygen molecules to form ozone.