On a hot summer’s day, it’s tempting to leave the ceiling fan on while you pop out to the store or to grab a coffee with a friend. The intention is to allow the room to cool down so that when we return, it is still pleasant.

However, based on how ceiling fans provide their cooling mechanism, this is a pointless exercise, which may carry some safety risks as well.

The risk of running a ceiling fan on when not at home depends on if it runs longer than recommended. However, ceiling fans are a fire risk (they have an electric motor). If run while the house is empty, a fire would go unnoticed until it had caused extreme damage.

Contents show table of contents
Ceiling Fans Are Not High Fire Risk
Leaving Ceiling Fan on When out Is Pointless
Energy and Money Wasted
Unnecessary Wear and Tear
Sources
Was this helpful?

Ceiling fans are intentionally designed to be on for hours at a time. They do not actively produce heat like some other household appliances (dryers, stoves, etc.). Essentially, they are considered to be low risk when it comes to causing a fire when used correctly.

However, low risk doesn’t mean no risk, and the caveat of proper usage is critical.

According to the National Fire Protection Association (NFPA), between 2012 and 2016, local fire departments responded to approximately 44,880 home fires involving electrical failure or malfunction.

Fans were responsible for 6% of these fires. This doesn’t sound like much until you understand that this makes them the third biggest cause of electrical house fires and even more dangerous than dryers, which actively produce heat.

If a ceiling fan fire is going to start, there is a higher chance that it will happen with a fan that runs overly long (and overheats), and the damage associated with the fire will be greater the longer it goes unnoticed (e.g., when you are out of the house).

Leaving Ceiling Fan on When out Is Pointless

Ceiling fans are designed to cool humans, not rooms.

Did you know that heat is carried in your blood? Well, it is. And when we are hot, our superficial veins dilate, coming closer to the surface of our bodies, and heat is released through our skin.

This helps us to cool down, but as heat is released, it increases the temperature of the air against our skin, which slows down the release of more heat (there is a smaller temperature gradient).

Ceiling fans cool us via wind chill. This is when the ceiling fan’s airflow blows over our skin, removing the warm air from against our skin, and allowing more heat to be released from our bodies. 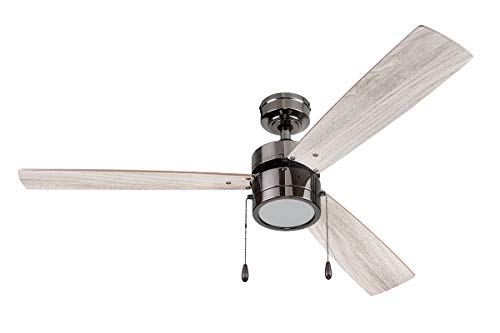 In addition, the airflow can wick away sweat from the skin, introducing evaporative cooling as well.

As this is how ceiling fans exert their cooling effects, you can now see why empty rooms are not cooled by ceiling fans.

There are other benefits to having a ceiling fan on, such as increased air circulation. This is not reliant on your presence in the room. It can keep the AC-supplied cool air circulating throughout the house while you are out or it can keep the flies off of your food while you pop out to buy a few last-minute ingredients.

However, the air circulation benefits are not significant enough to warrant running your fan at home while you spend 12 hours fishing on the lake during summer.

In addition to the potential for overheating and risk of fire, leaving a ceiling fan on while you are out is not the wisest use of energy.

As mentioned, the cooling mechanism of ceiling fans is dependent on your presence, so it won’t make the room any colder to return to. It might even make it hotter if the motor starts giving off excess heat.

Ceiling fans have an electricity usage of roughly 55 to 100 W per hour, depending on the size of the fan. Your normal 48″ fan uses 75 W per hour. The average electricity cost for residents in the US is 14.47 cents per kilowatt-hour (kWh).

This is not a high cost or energy usage, however, it is wastage.

With the cost of living being what it is, we all want to make sure that our appliances last as long as possible. Similar to our other home appliances, ceiling fans will experience wear and tear over time. They too need to be properly used and maintained to ensure optimal performance and longevity.

Running the ceiling fan when no one is there to appreciate it, places a demand on the equipment, and exhausts the components unnecessarily.