Hunter is indisputably the world’s oldest and largest ceiling fan company. The company has an excellent reputation for quality, power, and a solid guarantee behind all its products, which are available worldwide.

Hunter ceiling fans also used to be known for being made in the USA, but this is no longer the case.

The Hunter Fan Company was founded in the United States and is based in Memphis, Tennessee. Hunter ceiling fans used to be made in the USA, but the company moved its production abroad in 2002. Nowadays, their ceiling fans are made in China.

The Company Is Based in the US

Hunter was founded in and established deep roots in the USA.

The original Hunter fan company started in 1886 in Syracuse, New York, and moved to Tennessee during the post-second world war industrial boom that was taking place in the south.

The company has been based in Memphis since 1946, although it was established much earlier than that.

Even though its manufacturing division has moved abroad, the company headquarters are still in Memphis, Tennessee.

Are Hunter Ceiling Fans Made in the US?

Hunter ceiling fans were made in the USA for over 100 years, but manufacturing eventually moved abroad.

This move made economical sense and meant that Hunter could continue to be a competitive brand in the ceiling fan industry. They were also not the only company to relocate production overseas, Honeywell and Minka Aire did the same thing.

Hunter Fans Were Originally Made in Tennessee

Before the manufacturing division of Hunter moved overseas, the company made their ceiling fans and other related items in their factory in Memphis, Tennessee.

The manufacturing division operated from the Memphis location until 2002, when the company decided to move its production abroad.

Hunter Original© ceiling fans made in Memphis have become iconic collector’s pieces, and they can still be found on eBay and similar websites.

Hunter Fans is a company with a proud tradition of fine craftsmanship and moving with the times. Their quality has been consistently excellent since the company started more than 135 years ago.

The original fan business had to adapt to meet many business challenges during its existence.

To keep up with costs and remain profitable without sacrificing quality, Hunter moved the production of its ceiling fans to manufacturing facilities in China.

Did the Quality of the Fans Stay the Same?

Hunter fans continues to deliver a consistently high-quality product throughout its range, which includes residential and commercial lines.

Although there were some changes to the design of the iconic Hunter Original© ceiling fans in terms of the materials used, the products are still covered by a limited lifetime warranty on the motor. This speaks of the company’s confidence in the quality and reliability of its products. 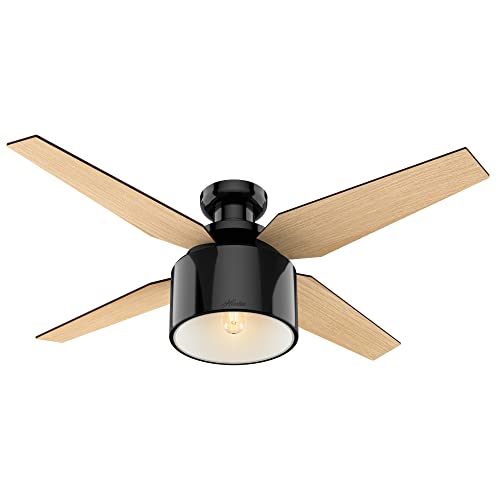 The decision to move the manufacturing component of the company abroad to lower production costs has allowed Hunter Fans to remain a strong force in a very competitive market.

One of the most noticeable modern changes to the Hunter Original© ceiling fan design is that they no longer have a cast iron motor like earlier models. However, the exterior housing of the fan is still made of cast iron.

It is worth mentioning that the new motors are manufactured to fit perfectly into the original fan models, so replacing the worn-out fan motor does not mean you will need to discard your original Hunter fan.